Odell Beckham Jr. Defends Baker Mayfield And Says He’s ‘Always Got His Back’ No Matter The Criticism 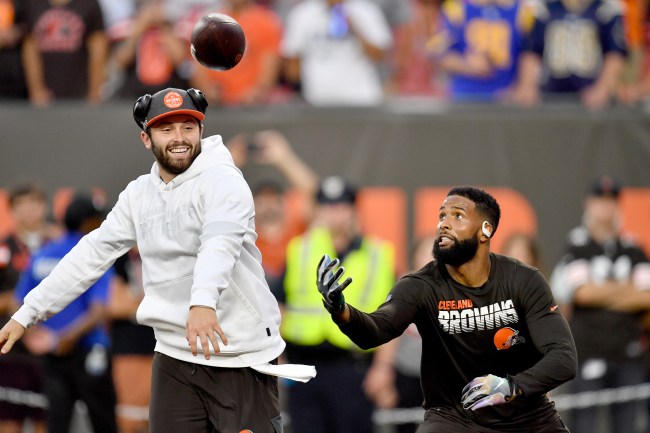 Odell Beckham Jr. and the Cleveland Browns aren’t have the season many expected them to have. After winning the NFL offseason by acquiring the All-Pro receiver, among other talented players, everyone in the Dawg Pound — including myself — expected this Browns team to be different. People bet money on them to win big. Players got caught up in the moment by comparing themselves to great teams in other sports. And Baker Mayfield was supposed to take a giant leap in guiding this team to an AFC North title.

Currently at 2-5, the Browns have been anything but impressive. Not only have they looked terrible on the field — making boneheaded mistakes mixed with questionable play-calling — but players like Mayfield and Odell Beckham Jr. just don’t seem to be having fun. They both seem out of synch, leading media and fans to pounce on the Browns for being dreadful.

While the schedule does get easier in the second half of the season, who knows if anything will really change. Regardless of what happens, though, Odell Beckham Jr. isn’t throwing his quarterback under the bus, because, talking to ESPN today, the wideout stepped up and defended the former No. 1 overall pick, claiming he’s “going to jump in the fire” with Mayfield, and saying it’s not all on the second-year player for the team’s struggles.

“You can’t sit here and say it’s all on him. You have to take a look at everything going on around him,” Beckham said. “Obviously, he has to play better. I have to player better. … We all need to do better. Can’t sit back and be like, ‘It’s Baker’s fault.’ I feel like that’s the easiest thing for us to do. I’ve been in situations where one person is getting the blame, and the rest of the people are quiet to kind of stay out of the fire.

“I’m going to jump in the fire with him. I’ll be the first one. Some of these losses are on me. I need to be in the right place at the right time. I’m going to do better. And that’s what I plan to do for the rest of the season.”

So, while Baker Mayfield continues to get crapped on by, well, everyone — with ESPN’s Damien Woody even going as far as saying that he’s “sick” of the quarterback’s antics — Odell Beckham Jr. isn’t turning his back on his teammate anytime soon. And as someone who has felt that kind of criticism before during his time with the New York Giants, OBJ knows what Mayfield’s going through.

“Nobody likes to feel like you’re being poked at or prodded at, especially not a guy like that,” Beckham said. “I’ve been through that journey already, I’ve been through this fire. That’s a part of me that’s able to help him in a way. This is a kid who cares about football, cares about winning. Whatever people make him out to be just because of his personality — if we were winning and he was still doing it, we’d all be here laughing. Because we’re losing, we want to kind of poke at him a little.

“I’m going to be the first one here to defend him every single time. I’ve always got his back. I know what it’s like. I’ve been there. … I understand how we’re looking for the negative. But he wants to win. He’s upset he’s not winning, or he hasn’t done to the best of his ability, that’s upsetting. Just upsetting. We want to be great.”

As dysfunctional as things may seem to outsiders, internally, it sounds like Mayfield’s teammates, and Odell Beckham Jr. specifically, are saying the right things. And, even though the season hasn’t gone as well as they hoped, OBJ is still keeping the faith that the Browns can accomplish everything they want; it just might take some time.

“The more games we have together, the better we’ll be, but it’s time for us to turn it on,” Beckham said. “You have a highly regarded quarterback [who] I think is a phenomenal player, and I just want to be able to help him in every which way I can.

“I have no doubt in my mind that at some point in time it’s going to be everything that we all talked about.”

As a Browns fan, you’ve got to love the optimism and, more so, the humility and maturity from Beckham Jr., who has had his fair share of run-ins with the media in the past.