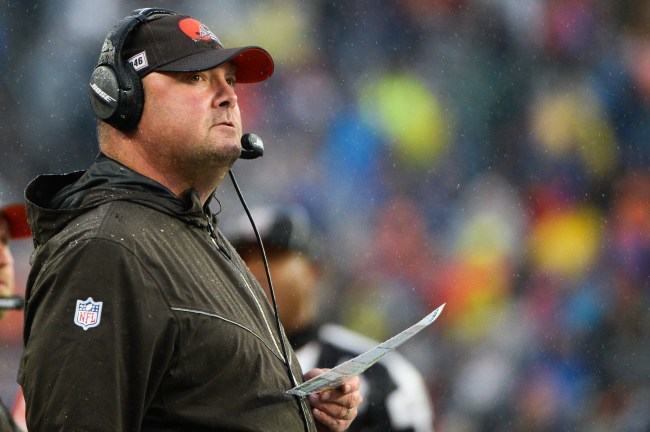 If you didn’t catch the 27-13 Patriots win over the Browns on Sunday, your brain escaped being tied up in a figure-eight knot by the buffoonery of Browns coach Freddie Kitchens.

(Oh yeah, and you missed this.)

Put it in the Browns HOF pic.twitter.com/OBtZOYWBrJ

Moving on. Back to Kitchens. Let me set the scene.

There’s 6:17 left in the game with the Browns down 27-10. The Browns’ offense was faced with a 4th-and-11 and were positioning to punt when they were called for a false start, pushing them back five yards into a 4th-and-16 situation from their 19 yard line.

Kitchens then made the mind-melting decision to send his offense back onto the field to go for it on 4th-and-16, a tactic he decided against on 4th-and-11. 2+2 = 5.

Baker Mayfield was then sacked and Cleveland turned the ball over on downs to the Patriots.

Kitchens spoke about his decision after the game, providing zero rational clarity.

“I didn’t want to use the timeout and I wanted to go for it,” he said after the game. “We had half of our guys running off, half of our guys running on and I wasn’t giving up right then by punting the ball to them. The only chance that we had was to convert for a (first) down and then we didn’t. The defense’s job is to go out there and stop them and they did, so it gave us a chance. I was still trying to win the game.”

Rex Ryan was absolutely appalled that a professional coach would ever make a decision this outlandish.

Rex Ryan did not mince any words talking about Browns HC Freddie Kitchens and his questionable decisions… pic.twitter.com/oQVnVPyfAR

The internet was not much kinder.

Browns HC Freddie Kitchens trying to get fired. Punt unit is on the field for 4th&11, whistled for false start, it’s now 4th&16. Freddie brings offense bck on the field to for it on his own 30. Sack, turnover on dwns. WTF was that Freddie?

Freddie Kitchens ready to answer on offense tho…. pic.twitter.com/9u7hloKBGz

Freddie Kitchens was in his bag today 🔥🔥🔥🔥

Fourth-and-16 from own 19: Call offense back on field to go for it.

Life with Freddie Kitchens as your coach.

Per source, #Browns HC Freddie Kitchens ruled out for remainder of game (brain)

Freddie Kitchens seems like a nice fellow but I wouldn’t hire him to coach Lyndhurst Middle School.

Hey Freddie, don’t take it personally. Teams become confused when the play the Patriots. It could always be worse.

Never forget when the colts ran the worst play in history 😂 pic.twitter.com/2HJt0dWsqY