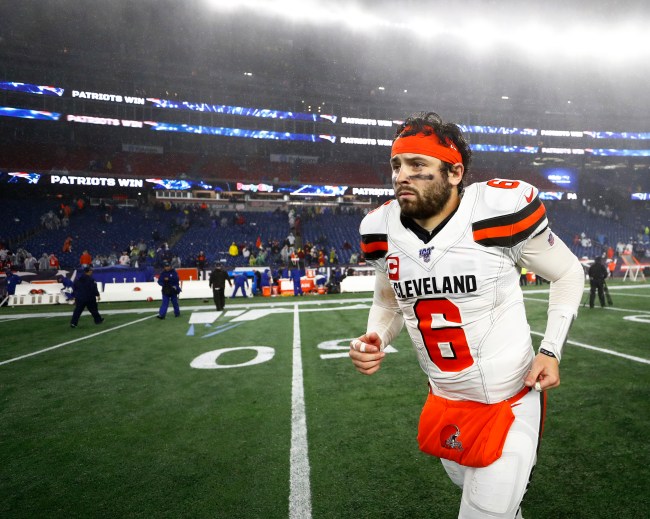 Baker Mayfield has had a drama-filled second season in the NFL so far, hasn’t he? While his rookie campaign was impressive — with the 2018 No. 1 overall pick passing for a rookie record 27 touchdown passes in just 13 starts — he and the Cleveland Browns have been pathetic this season, one in which many picked them to win their division and even make a run at the Super Bowl. Sadly, that hasn’t been the case.

As a lifelong Browns fan, I’ve already written about how I’m off the Baker Mayfield train for the time being. Sure, the guy can turn it around — after all, he’s got the talent and moxy — but he’s overthinking things way too much, and hasn’t seemed to deal with the pressure of being in the spotlight this year. Given the Browns’ easier second half schedule, who knows if that changes, but what Mayfield did earlier Wednesday morning doesn’t give signs of a team leader ready to better the season.

That’s because, while talking to longtime Browns beat writer Tony Grossi, Baker Mayfield didn’t just throw a temper tantrum and cause an awkward moment over a question, but he actually stormed off, too, leaving national media wondering if the pressure has finally gotten to Baker, and even caused some to make comparisons to NFL bust Ryan Leaf. Take a look at the exchange between the quarterback and Grossi below.

Unfortunately, Baker Mayfield’s emotions may have gotten the best of him in the situation — but, if so, the kid isn’t apologizing. In fact, in true Mayfield fashion, he’s doing the exact opposite, going on Twitter to explain himself and defend the passion in which he tried to answer Grossi’s question.

say that I’ve gotten complacent. My sense of urgency is at an all time high. And if I offend anybody along the way… that’s too bad

Whether you like it or not, Baker Mayfield does have a point here, as the quarterback has always been brash, open and unwilling to give a BS answer for the sake of being politically correct. Unfortunately, because he and the Browns look like crap at 2-5, this sort of thing gets blow out of proportion.

Adding more to the narrative here is the disdain Baker Mayfield seems to have for Tony Grossi, who has regularly bashed the former No. 1 overall pick, dating back to before the Browns took him first overall in 2018, and, since, has constantly compared him to one Johnny Manziel, who had off-the-field issues and addiction problems; nothing of which Mayfield has had. So it makes a little more sense as to why Baker blew up the way he did. Had it been any other reporter, who knows if he acts the same way?

This is being construed as Baker not being able to take the heat but I’d say his reaction probably had more to do with the fact he and the reporter who asked the question haven’t seen eye to eye for some time. Not taking sides. Just pointing out. https://t.co/Z2hSe6T5Rs

Whatever side you’re on, bottom line is this: it’s a bad look for Mayfield and the Browns. It brings more scrutiny to a team that has had to deal with negative press ever since they embarrassingly got blown out on opening day against the Tennessee Titans at home, and, regardless of Baker Mayfield being true to himself or not, the incident with Grossi will lead many to think the quarterback continues to be self-centered and immature, which is only doing more harm to him than anything else.