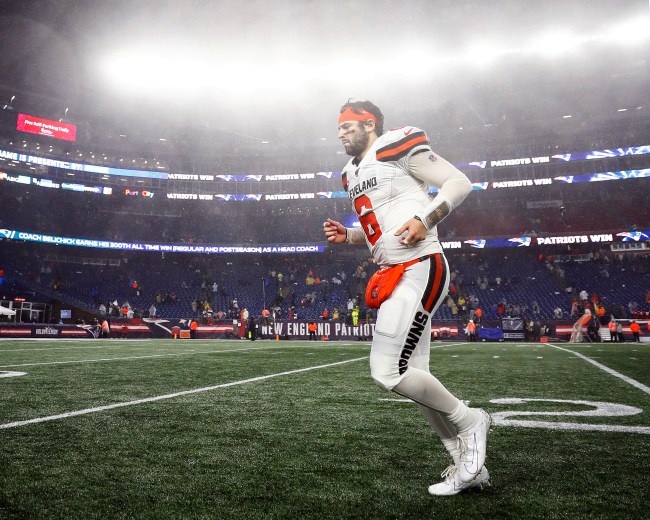 And just like that, the once hyped Cleveland Browns are 2-5 and dead last in the AFC North (I’m not counting the Cincinnati Bengals, just professional football teams).

The Browns fell to the undefeated Patriots in New England, 27-13, making some unforgivable blunders in the process.

In the first quarter alone, Cleveland turned the ball over on three consecutive offensive snaps, two fumbles by running back Nick Chubb and one Baker Mayfield butt-fumble level fuck up that added to the QB’s league-leading interception count (11).

After the game, the man who recorded a rookie record just a season ago by throwing for 27 touchdowns in 13 games, cited his team’s lack of discipline as the driving force behind their underachieving first half to the season.

“It’s just undisciplined; guys not being focused on doing their job. It starts first and foremost with me, to be a leader every single down. Get our guys lined up, make sure that we’re set, we’re paying attention because if we can’t use cadence we’re hurting ourselves.”

“Any time we try to use a double-count, it seems like we’re false starting a little bit, but we’ll get the discipline part fixed, the accountability,’’ Mayfield said.

Mayfield, who finished the game completing 20-of-31 passes for 194 yards, 1 TD, 1 INT and FIVE sacks, is alluding to the Browns 13 penalties against the Patriots, including six false starts.

“It’s just the consistency and a lack of discipline and accountability right now on Sunday seems to be the problem. So, whatever our guys have to do. Whatever we have to do overall to translate that into the game, no matter the environment, no matter where we’re at, no matter who we’re playing. We have to do our job, and it always comes back to that. I’ve said we can be a great team when we do our job, but we just haven’t translated it yet.’’

Luckily for the Browns, the second half of their schedule sets them up perfectly to right the ship, with their next eight opponents posting a current aggregate record of 19-44.