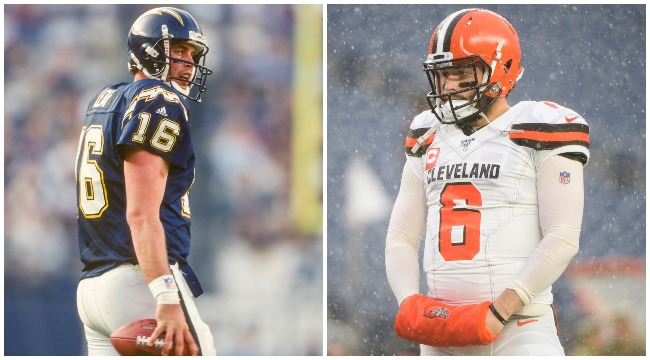 December 30, 2018: Baker Mayfield broke the NFL rookie record with his 27th touchdown pass during the Browns’ final game of the season against the Baltimore Ravens. He needed just 13 games to do it.

What a difference a year makes in this beautifully fickle league.

Ryan Leaf, a former number 2 pick who has widely been considered one of the biggest busts in NFL history, has gone on public record drawing comparisons to his career and what he’s seen this season with Baker Mayfield–in play and in attitude.

Leaf said this after Baker’s three-interception loss to the Seahawks in Week 6:

“I’ve always been this brash, arrogant kind of guy. That’s the way I came back at everybody instead of just walking up in front of the camera and going, ‘Oh my God. This was my fault. I’m going to do everything I can to make sure this doesn’t happen again.’ And hearing Baker yesterday — even though small — blame the officials for some calls is problematic for me because as a quarterback, you want to be able to stand up in front of everybody and take personal accountability.”

Leaf’s claims were given legs Thursday when Baker Mayfield engaged in a heated moment with a reporter who asked him about some questionable decisions made in the Browns 27-13 loss to the Patriots Sunday.

Good thing baker didn’t get picked by the jets. If grossi annoying him, New York would’ve ate him up. Would’ve had him in there lookin like ryan leaf pic.twitter.com/VzMlXtyVPP

Baker Mayfield gonna be Ryan Leaf. His skin too thin.

Baker better start taking personal accountability or too may end up in a Montana state prison in 2012 for felony burglary and drug possession.