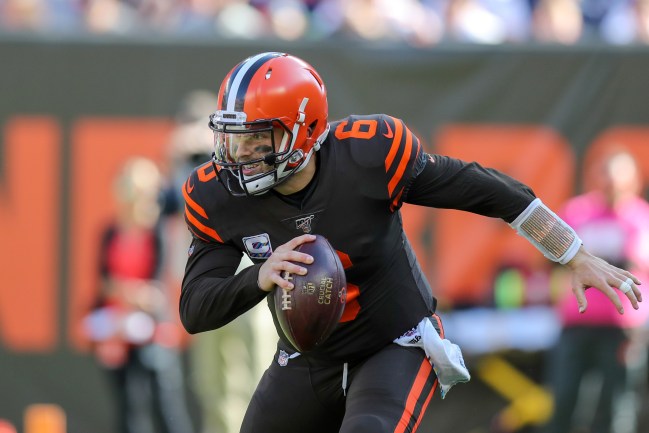 I think that’s the first time in 20 years that name has been written on the internet without the phrase ‘Draft Bust’ next to it.

The man who was picked only behind Peyton Manning in the 1998 NFL Draft is now widely considered to be one of (if not the) biggest busts in NFL history, spending just four years in the league before the embarrassment of his failures contributed to the deterioration of his mental health and his reliance on drugs.

After spending time in Montana state prison in 2012 for felony burglary and drug possession, the 43-year-old is sober and working with sober living programs to end the stigma that exists surrounding mental health and drug abuse.

Leaf is also using his experience as a litmus test for current NFL quarterbacks who he believes to have the same temperament as he did, a self-proclaimed “highly competitive, borderline arrogant, angry individual.”

Leaf stopped by The Rich Eisen Show to draw comparisons between his career and what he’s seen this season with Baker Mayfield, who’s thrown a league-high 11 interceptions and most recently directed blame on the referees in a three-interception loss to the Seahawks.

“When things start to go bad, you put yourself out there in this form. And people can easily attack it. I have a very small sample size: 2-0 to start my NFL career. Talking a lot of smack. And then I walk into Kansas City and put up the worst football game of my existence. And I’ve always been this brash, arrogant kind of guy. That’s the way I came back at everybody instead of just walking up in front of the camera and going, ‘Oh my God. This was my fault. I’m going to do everything I can to make sure this doesn’t happen again.’ And hearing Baker yesterday — even though small — blame the officials for some calls is problematic for me because as a quarterback, you want to be able to stand up in front of everybody and take personal accountability.”

Leaf’s criticisms come just four months after saying that his own arrogance essentially led to his demise: “when the magnifying glass got stronger, I started to catch on fire.”

It feels like water is crashing over the sides of the Browns season. Unfortunately for Mayfield and the Browns, things won’t get easier. After their bye week, they will be tasked with going into New England to try to take down the unbeaten Patriots.