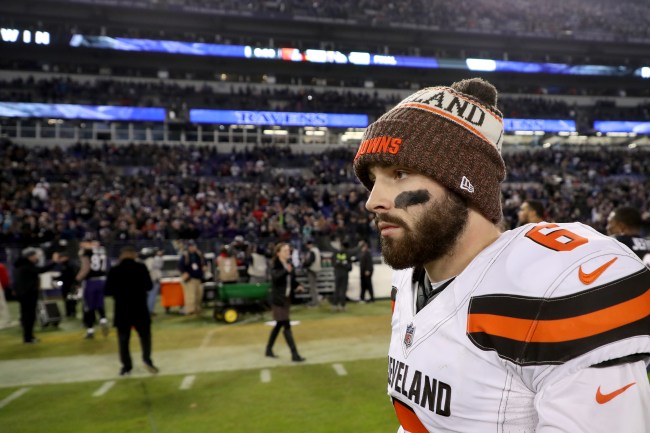 Baker Mayfield had a great rookie campaign for the Cleveland Browns, as the 2018 No. 1 overall pick went from backup to starter to setting a new rookie mark for passing touchdowns. But with the Browns being a trendy pick to compete for (gulp) a Super Bowl run, Mayfield’s going to have to improve in a lot of areas both on and off the field, as the team went just 7-8-1 last season.

Sure, adding a legit superstar receiver like Odell Beckham Jr. will presumably help Baker Mayfield get better, but there are other things he might need to focus on in order to lead his team to where they have the talent to go. And one person who offered up some advice on how to do that is a guy who knows all too well about being in the spotlight and not living up to expectations; Ryan Leaf.

Leaf, the former No. 2 overall pick in the 1998 NFL Draft, famously flamed out, and, since he’s cleaned up his life in the years since, he’s now trying to give guidance to younger players. One of those players is Mayfield, who Leaf once compared himself to when he was a young player. Talking to NFL Network’s Good Morning Football recently, here’s the advice the former quarterback has for the Browns quarterback as Mayfield enters his second season.

“Baker Mayfield’s behavior worked last year because they won. Now, if they don’t win this year, are people going to look back on it and say – it’s a fine line you have to walk when it comes to that,” Leaf said via NFL Network’s ‘Good Morning Football.’

“But that’s who he is. There’s a swagger to him. There was a swagger to me; if I would have won, it would have looked very similar. But I didn’t. And therefore, when the magnifying glass got stronger, I started to catch on fire, essentially. So I’ll be interested to see how that works. We saw a little blowback with the Duke Johnson comments here in camp. We will see where that goes. He just needs to do his job, and they have a lot of expectations. People are talking about the Cleveland Browns like it is the second coming right now, which, we haven’t seen anything yet.”

Look, say what you want to about Ryan Leaf as a player, but in the 20 years since his rookie season in the NFL, he’s doing the right thing in trying to help younger guys. Baker Mayfield plays with a chip on his shoulder — which carries into other things, like his feud with Colin Cowherd — and, while that worked in his first year because the Browns actually won some games, the signal-caller will need to balance it and focus on winning more this year.

Remember, some of Baker Mayfield’s veteran teammates reportedly already talked to him in the midst of his comments about Duke Johnson, and, while all signs indicate his locker room loves playing with him, it’s important to hold back on everything that’s he’s thinking, and Leaf’s just reminding him of that as someone who didn’t really manage his emotions the right way when he first came into the league. As a Browns fan, hopefully Baker considers the advice, but still plays with the swagger he needs to be productive.