Baker Mayfield’s Taking Shots At College QB Sam Ehlinger For Some Reason, And I F’in Love It 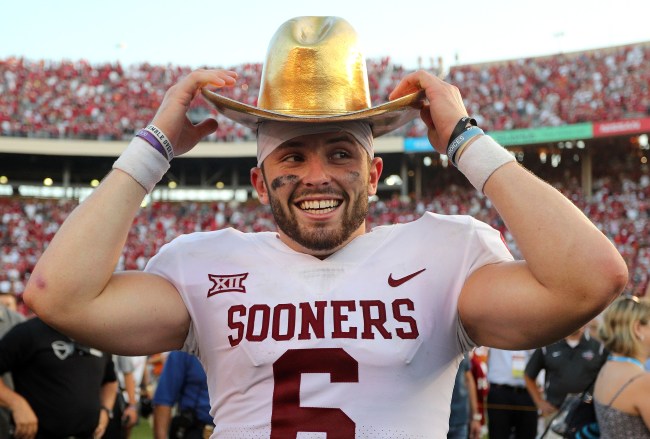 Baker Mayfield isn’t someone who’s going to keep his mouth shut when it comes to voicing his opinions. The outspoken Cleveland Browns quarterback will say what he wants, when he wants, and he doesn’t give a damn who it might piss off. Whether it’s about current teammates, people in the media like Colin Cowherd or someone else, Baker Mayfield will let you know his thoughts.

That’s just one of the reasons why you’ve got to admire the dude. Sure, it might come across as cocky to some people, but Baker Mayfield represents the new breed of quarterbacks, one who isn’t a buttoned-up robot without a personality. Hell, the reason he was the No. 1 overall pick in the 2018 NFL Draft was because, in addition to his talents, he flashed confidence and charisma like nobody else did in his class. He’s gone from walk-on to starter to Heisman Trophy winner to the leader of an NFL franchise, so things to be working out OK for him doing things his way.

While Baker Mayfield clearly carries a chip on his shoulder as a form of inspiration in pretty much everything he does, he’s unapologetic about it. And his latest beef is something that goes to show just how much Mayfield will blast someone if he sees the opportunity to.

After Ehlinger stood on the podium of the Sugar Bowl last year after his team’s victory, he declared that Texas Longhorn football was back. Of course, going to the school’s biggest rival, Oklahoma, that didn’t seem to sit too well with Baker Mayfield, who unleashed on the kid during a radio appearance with SportsTalk 1400. Take a listen to the interview below.

.@bakermayfield made it clear that Texas is NOT back. And, he had some thoughts on the Longhorns' starting QB, Sam Ehlinger, with @TedLehman11 and @Tyler_McComas. #Sooners pic.twitter.com/7BZ9wS5Vjw

It’s one thing to playfully jab someone for going to a rival program, but Baker Mayfield legit goes all-in on his dislike for Ehlinger, saying that the college QB can stay down there in Texas and that “he doesn’t like me and I hope he knows I don’t like him either.” That’s quite the bold statement, but, hey, Mayfield’s not going to hold back.

Say what you want to about Baker Mayfield. Go ahead and say he’s acting petty for going after a college kid about a rivalry he’ll never participate in again. Say that you’d rather have him focus on the NFL and not something in the past. But, personally, the chip on his shoulder is so massive that it’s hard not to like how outspoken Baker is, and it’s clear he doesn’t give a shit about what other people think about him, and he’ll run his mouth no matter what the topic is about.