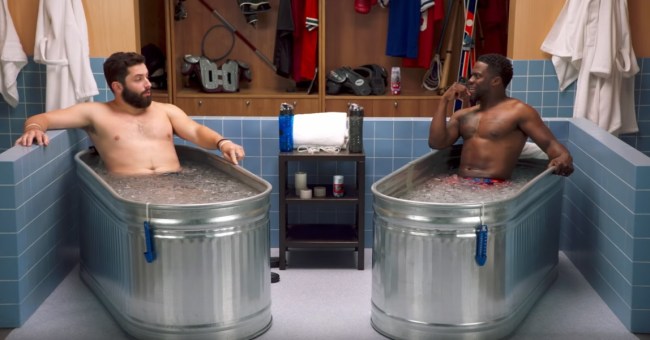 The last time we saw Kevin Hart he was once again being denied entry to the winning Super Bowl team’s celebration. Thankfully for him, this year he was rescued by Patriots president Jonathan Kraft and unlike last year (when he was completely hammered) did actually get to mingle with the champs as they celebrated at the stadium.

Prior to that, on his previous episode of “Cold As Balls,” Hart was being intimdated by WWE superstar Ronda Rousey after spending some time chatting while sitting (and freezing in Ronda’s case) in ice baths.

This week Hart was joined by record-breaking Cleveland Browns quarterback Baker Mayfield. And things got off to a hilarious start when Hart tried joking with Mayfield about talking trash only for Mayfield to non-sell it then get off a very solid short joke before they entered the tubs.

Hart seems very testy throughout the beginning of the show, calling Mayfield “stupid, “a “jackass” and saying Baker’s wave “might be the stupidest shit he’s ever seen.” After which Mayfield made a nice “can you see over the steering wheel of a car” joke.

At one point Mayfield told Hart that when he walked on at Texas Tech he took the starting QB job from Davis Webb, now on the Jets, and when Hart dropped a loud “YOU SUCK, DAVIS!” this was Mayfield’s reaction.

Basically, most of the episode consists of Hart busting on Mayfield (and whoever those two guys are that are always standing around) and Mayfield cracking up. Especially when Hart says his nickname should be “B.M.” cuz you the sh*t.

Check out previous and future episodes of “Cold As Balls” on the Laugh Out Loud app and LaughOutLoud.com.