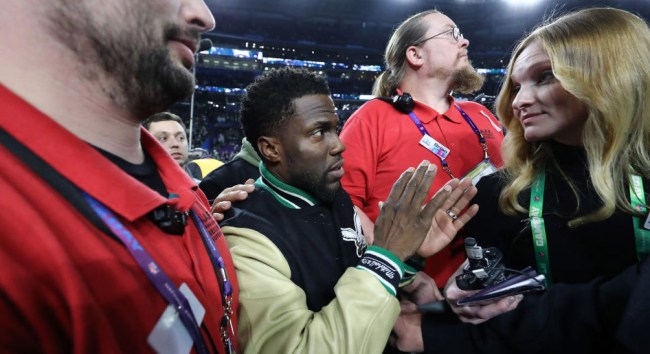 Nick Foles may have been officially named Super Bowl LII MVP, but for my money Kevin Hart might have been da real MVP. From trying, and failing, to get on stage with the Philadelphia Eagles during the trophy presentation to dropping an F-bomb live on NFL Network to his still drunk apology/non-apology hours later, Hart was absolutely on fire.

“Me trying to go onstage with the trophy is definitely in the top two stupid mistakes I’ve ever made, but who cares? The Eagles won the Super Bowl,” Hart said as a part of his apology/non-apology on Instagram.

Two days later, Hart is still embarrassed/not embarrassed about his behavior in Minneapolis, but he is very grateful to the security guy who stopped him from fully committing one of those top two stupid mistakes.

The internet will forever be undefeated 😂😂😂😂😂….How did they even get this picture??? This camera man may be the best ever….This was my faces immediate reaction when the security told me no….I can’t stop laughing 😂😂😂😂 Can somebody please get me the security guards name, I have to find him. I want to send him some wine and a dope ass gift basket….if he had of let me up there it would have been all bad. Thank you man….I owe you big time!!!!! I honestly had one of the best times of my life and if I could do it all over again I would do the exact same thing. I still can’t believe we won!!!!!! #Eagles #PhillyPride #ThankYouBabyJesus #ComedicRockStarShit #IrresponsibleTour #DopePic

Hart also shared a hilarious video which breaks down just how many drinks he had on Sunday and some footage of him getting mauled by some of the Eagles players on the field. (Don’t touch his head!)

All I can do is laugh….We had a blast yesterday at the game. I treated my entire team to the Superbowl….I love the shit out of my brothers!!!! This tour is about to be insane….Click the link in my Bio & get your tickets to my “Irresponsible Tour” ASAP!!!!! #irresponsibletour #ComedicRockStarShit #LiveLoveLaugh #ImDoneDrinkingForaLongTime #ImStillHungOver …..P.S me in the huddle with the players might be the funniest shit ever…..I still can’t believe we won the Superbowl….Im so damn happy for my city!!!!!!! Get yo tickets damn it!!!!! #irresponsibletour …..P.S again….Peep the way I told my security to stop worrying about me and to stay with my wife and then I got jumped by the football players in the huddle….I got pissed when they rubbed my head for some reason😂😂😂😂 I cant stop laughing 😂😂😂😂😂 #irresponsible

I think I am actually rooting for the Eagles to win it again next season now. Fly Eagles Fly.