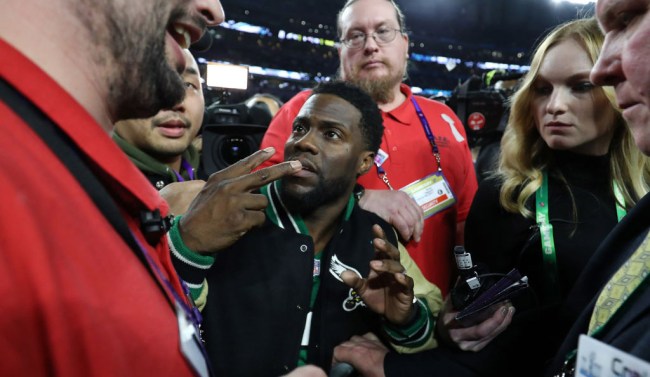 Philadelphia Eagles fans, rightfully, did some SERIOUS celebrating after their stunning victory over the New England Patriots in Super Bowl LII. Among those fans were Philly celebrities like Bradley Cooper, Sylvester Stallone, Kobe Bryant, Will Smith and Joel Embiid.

Oh yeah, and Kevin Hart. Kevin Hart DEFINITELY celebrated. On live TV. In front of over 100 million people. He even tried to climb on stage with the team to celebrate with the Lombardi trophy only to get hilariously rejected by security. And then there was the F-bomb he dropped on NFL Network (much to Deion Sanders’ amusement).

So, for many of us who really didn’t have a rooting interest in the game (other than wanting the Patriots to lose), Kevin Hart’s drunken antics were one of the true highlights of the game.

Lmao did Kevin Hart try to get past the security and get denied?!? 😭😭😭😭 #superbowl pic.twitter.com/jcTvL7RgXq

Apparently a couple of hours ago reality finally set in for what appears to be a rather hungover Kevin Hart as he apologized (sort of) on Instagram for being a drunk mess on live TV and trying to get on stage at Super Bowl LII.

“To all the kids out there, I just wanna say don’t drink. When alcohol is in your system, you do dumb stuff,” said Hart. “Me trying to go onstage with the trophy is definitely in the top two stupid mistakes I’ve ever made, but who cares? The Eagles won the Super Bowl.”