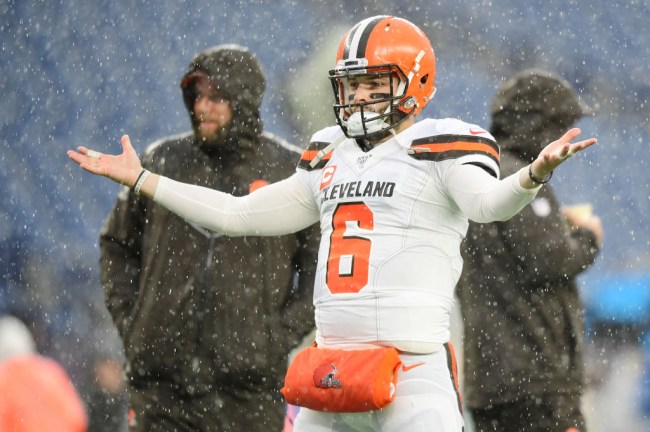 Things are going really well in Cleveland. The Browns are 2-5 after losing three straight games, they sit second in the league with 17 giveaways and Freddie Kitchens is completely in over his head.

During the team’s 27-13 loss to the Patriots this past Sunday the Browns did something only the Browns can do. With 6:17 left in the game with the Browns down 17 the offense was faced with a 4th-and-11 and was set up to punt when they were called for a false start, pushing them back five yards into a 4th-and-16 situation from their own 19-yard line.

Kitchens then made the mind-boggling decision to send his offense back onto the field to go for it on 4th-and-16 which resulted in a Baker Mayfield sack. The entire situation made absolutely no sense whatsoever.

During his weekly press conference, Mayfield seemed to have been asked about what the hell happened against the Pats and got into a pretty heated argument with a reporter before storming out of the room.

“You don’t play, you don’t know it. That’s just plain and simple.”

As I said, things are going super well in Cleveland right now.

Mayfield is obviously pretty fed up with what’s been going on with his team this season and finally snapped.

It’s been a disastrous year for Mayfield as he’s thrown just six touchdowns and 12 interceptions through seven games this season and hasn’t gone a single game without turning the ball over. He was so bad against the 49ers earlier this year going 8-for-22 through the air that his passer rating would have actually been three-times better if he spiked the ball on every play.

The Browns play visitor to the 2-6 Broncos on Sunday and if they don’t pick up a win there then all hell will break loose in Cleveland.