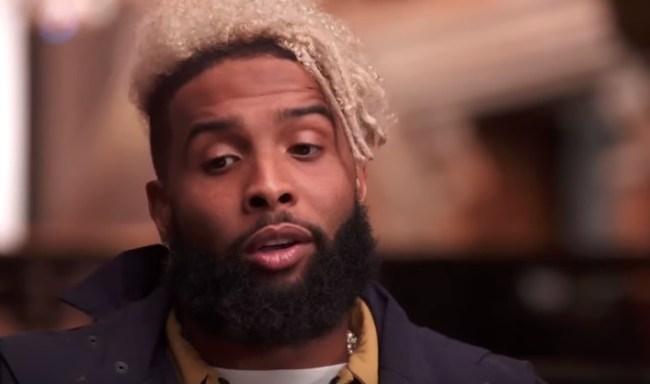 Odell Beckham Jr. of the New York Giants is one of the most freakishly athletic people on the planet. From making one-handed catches look simple and routine, to displaying quite the flamethrower for a right arm on a pitchers mound, OBJ doesn’t hold back showing off his God-given abilities.

With Odell’s New York Giants taking on the Philadelphia Eagles on Thursday Night Football tonight, we got a quick glimpse of the star wideout’s athleticism again — while showing that he’s a better field goal kicker than probably half of the kickers in the league. Need proof? Just take a look at this video from pregame warmups, where he makes a snag, spins the ball, quickly backs up and kicks the hell out of the pigskin through the uprights.

Impressive start to the night for @obj 😂

Go ahead and shake your head at that, telling yourself you could do it, too, but that’s sure as hell ain’t easy to do. Have you even just tried getting the perfect spin when doing that with a football? Yeah, not easy. But to then rush back and be able to kick a perfect field goal is even harder. But, hey, we should come to expect seeing things like this from Odell Beckham Jr., because he kind of amazes with everything he does.

As for the shoes OBJ did this little stunt in, just check out the flood-red Nike Vapor Untouchable Pro 3 Uptempo cleats. They’re pretty F’in sick, guys, with a personalized “OBJ” stitched on the outside of them. Here’s a quick peek from Complex’s Twitter account.

Look, I may be a 34-year-old who lost his athleticism a long time ago, but I’ll forever be amazed at the crap Odell Beckham Jr. does. I mean, c’mon, the dude is the OG when it comes to all these one-handed snags that are so popular these days, with people describing other guys’ insane catches as “Odell Beckham-like grabs.” Yeah, that means you’re pretty good at doing cool stuff.

Whether it’s doing the one-handed catch thing or throwing TD bombs in games, Odell is a gawd on the gridiron.