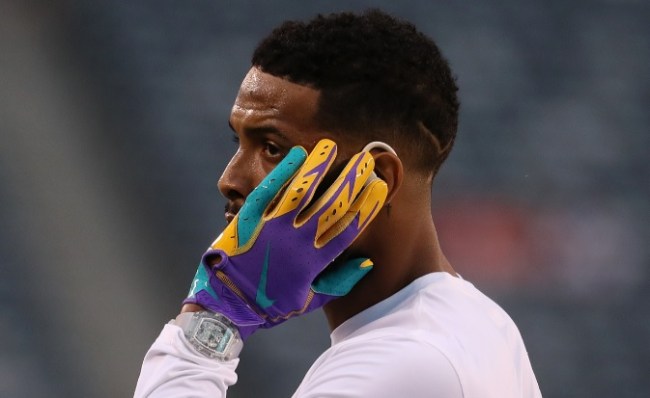 Odell Beckham Jr. made headlines during week 1 of the NFL regular season when he played a game by wearing a $189,500 Richard Mille watch.

The NFL immediately warned Odell about not wearing the watch again but he vowed that was going to do so anyway.

“I’ll still be wearing it,” Beckham said as the Browns prepare for a trip to New York for a Monday Night Football appearance against the Jets. “The same way I wear it every day, at practice, I go here, I go there. I’ve been wearing it. Take a shower with it on. It’s just on me.

“It shouldn’t be an issue.”

Asked about a potential fine, Beckham said, “For what? You’ve got to look into the rule book. It says you can’t wear any hard objects. The watch is plastic. But people have knee braces on that are hard and made out of metal and you don’t see them taping it up. No jewelry on, so I’m good.”

Before tonight’s Monday Night Football game against the Jets Beckham warmed up by wearing a $2 million Richard Millie watch.

Odell Beckham Jr. has a big watch on during warmups. pic.twitter.com/7SDPE2t59Y

Beckham didn’t keep his promise and was not seen wearing his watch during the game.

My photog @jpgunter tells me that Odell Beckham doesn't have a watch on. They got him on the gold visor tho. He was miffed. Thinks they're picking on him. Needs to be clear

Just imagine if Odell would have made this catch while wearing a $2 million watch. Would have been crazy.

JUST SOMETHING ABOUT THIS STADIUM @obj pic.twitter.com/e24DuCvKAs