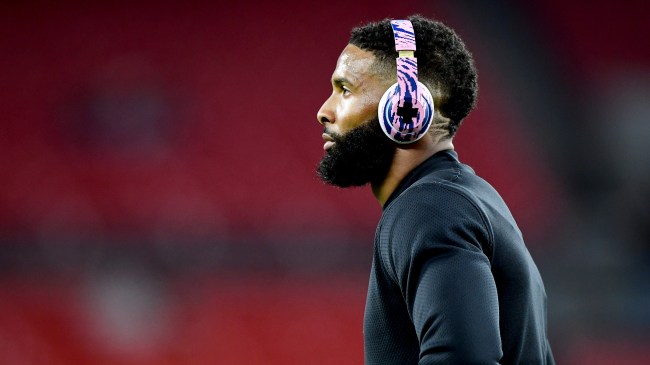 Odell Beckham, Jr. made it known that he was unhappy in his situation with the Cleveland Browns last year, particularly in regard to his relationship with quarterback Baker Mayfield. Tensions boiled over midway through the 2021 season and the Browns ultimately sided with their first-round pick under center rather than the All-Pro wideout.

Cleveland said that Beckham was the team’s issue, not the poor play of Mayfield, before sending him packing for Los Angeles. Now, yet another detail from the feud has emerged, and it involves Beckham steering NFL stars away from joining the Browns’ organization.

Von Miller, a longtime friend of Beckham’s, said that the two dreamed of playing together on the same team in the NFL. Last offseason, when the two players rehabbed from injuries in Colorado, Miller talked to the talented receiver to gauge his interest of joining forces.

Beckham said yes to the notion of becoming teammates, but with one stipulation. It couldn’t be in Cleveland.

Von Miller and Odell Beckham Jr. discussed playing with each other prior to joining in LA.

As it worked out, the two would become teammates less than one year after that conversation.

The news has to be a punch in the gut for Browns fans as they not only lost out on one of the NFL’s top pass catchers, but now they know that other stars were being discouraged from joining the organization, too. Making things worse, the team struggled through the 2021 season under Mayfield’s leadership, and Clevelanders must now watch both Beckham and Miller play in the NFC Championship Game on Sunday.

Beckham joined the Rams’ roster in November of this year. Since arriving in Los Angeles, he’s racked up 305 yards and five scores on 27 receptions. He failed to catch a touchdown pass over the first six games in Cleveland but seems to have found a great chemistry with Matthew Stafford.

He and Miller will suit up this weekend with a Super Bowl appearance on the line. The Rams take on division rival San Francisco Sunday night in the NFC Title Game.

Beckham appears to have gotten the last laugh and Browns fans are stuck wondering if sticking with Baker Mayfield is really the answer.