WATCH: Odubel Herrera Embarrassingly PIMPED A Home Run That End Up Being A Flyout 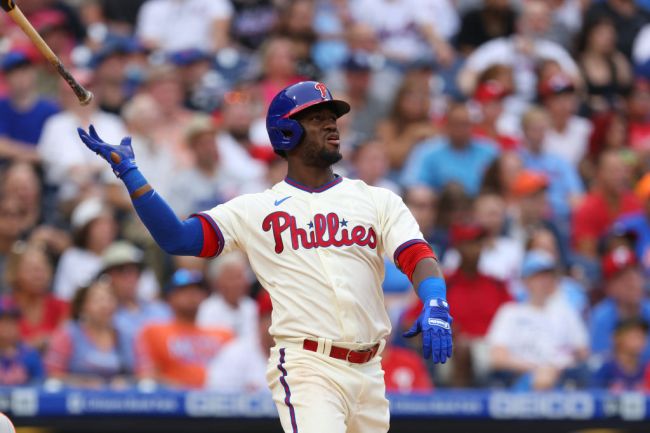 We can all aspire to the confidence of Phillies centerfielder Obdubel Herrera. The 29-year-old thought for sure that he had hit a go-ahead home run during last night’s game against the Dodgers but that was not the case.

Both teams sit second in their respective divisions and began a three-game series against one another on Tuesday. Los Angeles is the better team in terms of wins and losses and it shows. The Dodgers won Game 1 5-0 and got out ahead early again on Wednesday.

Cody Bellinger hit a two-run dinger in the fourth inning and pitcher David Price knocked in a run not long thereafter. Needing to reel in a 3-0 deficit in the bottom half of the inning, Philadelphia strung together a series of hits that scored two runs with two outs.

With a runner on first, up came Herrera. Price left his first pitch hanging over the middle of the plate and the Phillies outfielder made him pay— or so he thought.

Herrera took the 92mph sinker very deep to centerfield and underhanded tossed his bat behind him at the top of his follow-through. What looked like the go-ahead home run sounded great off of the bat but it quickly turned sour as the ball died and Bellinger hauled in the third out at the warning track.

The vicious bat-flip was for a flyout. Tough look.

As Herrera sent his bat soaring, the crowd went wild. Celebration quickly dissipated and turned to boos when the “home run” was caught. Spectrum Sports, which hosts every Dodgers game, had a tremendous call of the hilarious incident.

"Herrera flipped his bat like the ball was headed to Pittsburgh"

To add insult to injury, Philadelphia did not score another run and Los Angeles went on to win 8-2. At least, despite the loss, the Phillies didn’t bat-flip a fairly confident fly ball out. Oh, wait… Yikes.