Odubel Herrera Swung And Missed A Pitch That Went Between His Legs, Amusing Baseball Fans Everywhere 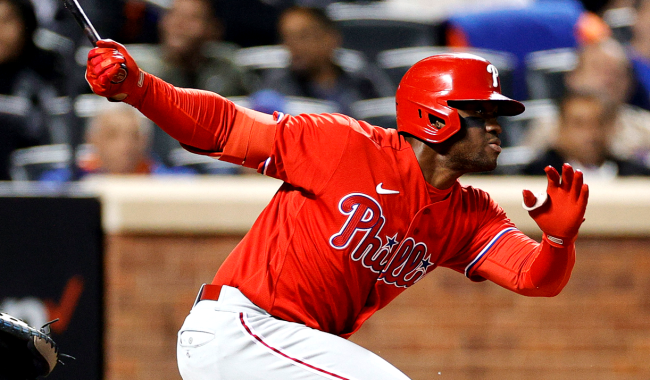 You know how happy all the golf duffers are anytime they see a professional golfer shank a drive or miss a gimme putt? Because it makes us all feel better about ourselves and it’s so relatable? “See! Even the pros make the same mistakes!” we say.

On Sunday, Philadelphia Phillies outfielder Obdubel Herrera pulled off a move like that, only in baseball.

During the game between the Phillies and Los Angeles Dodgers, pitcher Yency Almonte threw a slider that Herrera swung at and missed because, well… the ball ended up going between his legs.

“Whoa,” said the announcer when he saw the pitch. “Look where that pitch went!”

[With both the Phillies and Dodgers calls of it 🔊😂]

"Oh my gosh. It went between his legs. Goodness gracious." pic.twitter.com/zS7UYTOtAV

That right there is pretty much how almost every person watching the at bat by Herrera would have looked if we had been asked to hit that pitch.

Once again hitting a major league pitcher may be the hardest thing in sports https://t.co/56pQCxAZMS

Me playing The Show: Okay, stay patient, find a good pitch to swing at.

Sadly, for Herrera, things didn’t get much better as he ended up going 0-for-4 on the day and his Phillies lost to the Dodgers 5 to 4 after Gavin Lux hit a walkoff two-run double in the ninth inning.

Obdubel Herrera is also well known for his bat flips

This also isn’t the first time Obdubel Herrera has gone viral for something he did while batting.

Last October, Herrera thought he hit a home run, against the Dodgers (again), and proceeded to flip his bat like a boss.

The problem on that day was that the ball ended up being caught by Cody Bellinger on the warning track for an out.

Also on that day, just like on Sunday, the Phillies ended up losing to the Dodgers.

In his defense, Herrera is one of the best bat flippers in the game today (even if he has only hit 75 home runs in seven years with the Phils).

Early candidate for "bat flip of the day" belongs to Odubel Herrera.

Odubel Herrera bombs one and shows off the bat flip 🔥

Have to give him credit, you certainly can’t say his at bats aren’t fun to watch.