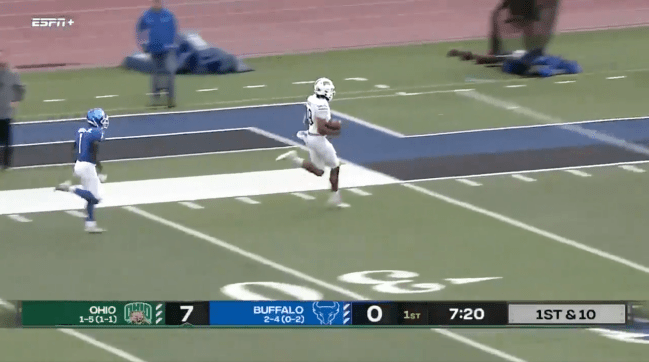 Ohio Football made history on Saturday afternoon. The 1-5 Bobcats took on the 2-4 Buffalo Bulls in a MACtion snoozer, but it ended up producing a highlight that you can’t miss.

The Ohio offense found itself with 1st-and-10 from the 1-yard-line. Except the “1-yard-line” was really the 1-inch-line.

In an effort to get some breathing room away from his own end zone, first-year head coach Tim Albin dialed up a quarterback run. However, instead of going for a gain of a few yards, it went for all of them.

Armani Rogers took the snap from the shotgun, took off to the left side, and never stopped. He went 99.99 (unofficially 104) yards for six.

The touchdown set the NCAA record for the longest run by a quarterback (because you literally can’t run any further) and it was mind-blowing.

As called on the Ohio Sports Network: pic.twitter.com/06dxIDLxPp

Rogers’ 99-yard score was mind-blowing because it makes absolutely zero sense that he was able to score. It was the slowest-looking 99-yard touchdown ever.

It took Rogers five full seconds to get to the 40-yard-line from the goal line. Yes, he took a roundabout route, but Rogers was able to run a 5+ second 40-yard dash and nobody was able to catch him. And then he was all by himself.

Regardless of what happened, how and why, the play was impressive. Rogers will forever be in the history books!