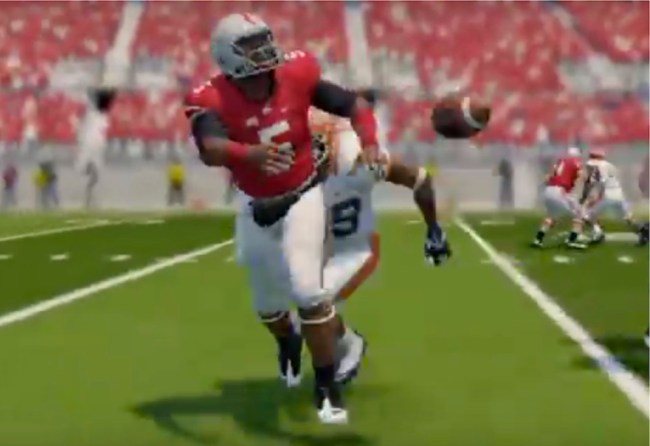 The Ohio State football team did something pretty unique (and cool AF) yesterday to announce the decisions of their newest recruits for the early signing period for 2019; and it’s something we’ve all done at some point in our lives with sports video games.

The Buckeyes, who finished with the No. 12-rated recruiting class for the early signing period, per 247 Sports, didn’t just show their future players what they’d look like in the scarlet and gray from a stupid old picture, but actually created them as a player in the since defunct NCAA Football franchise from EA Sports. And, because the last edition of the aforementioned video game was released in 2014, that was the version that the Ohio State football team had to use. But, hey, it’s still pretty awesome.

Here’s one of the EA Sports trailers for NCAA Football ’14, just to refresh your memory on how it looked.

OK, so the graphics weren’t exactly as great as they are in other sports games these days, but, c’mon, that was five years ago, bros.

Anyway, Ohio State football started the day by tweeting out a little teaser video, just to pique the interest of both the incoming recruits and their fan base, which seemed to work well, because it hadn’t been seen before.

From there, the Ohio State football Twitter account was blasting out highlight reel-like simulations of the early signing day recruits, starting with linebacker Cade Stover, who was named “Mr. Football” in the state of Ohio this year. Here’s what Cade’s looked like.

Mr. Ohio is staying in Ohio 💪

That was cool and all, but how about a high school kid absolutely trucking a projected first-round choice in the upcoming NFL Draft? That’s what Ohio State football simulated for offensive tackle Ryan Jacoby, who was seen pancaking Michigan defender Rashan Gary in his simulation video.

Just something about those home state guys…

The OL just got a dude in @Ryan_Jacoby! #GoBucks #Dynasty19 #NSD19 pic.twitter.com/zzfjGJSYfw

With 16 total recruits signing yesterday with the Ohio State football team, there were plenty of other NCAA Football ’14 player simulations, so check them out over on the school’s official Twitter account, because they’re all pretty sweet.

As schools and players continue to look for unique, never-before-seen ways to announce their decisions or recruit players, the Ohio State football team just upped the ante a little bit to make sure they stood out from the rest of the crowd. Well done, Buckeyes.