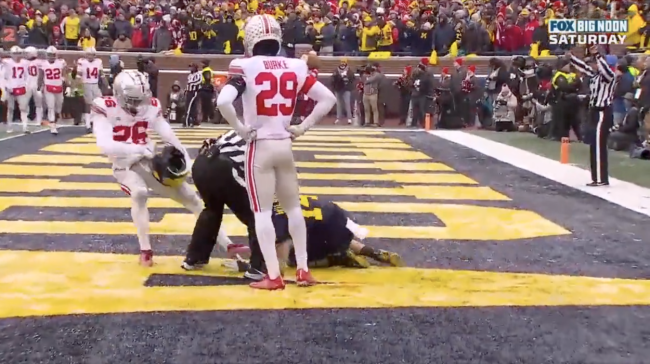 The 117th meeting of ‘The Game’ is living up to expectations. Not only did both Ohio State and Michigan enter the game with a deep-rooted hatred for one another, but both teams entered with 10 wins.

The winner of the 123-year-old rivalry was set to advance to the Big Ten Championship with a chance at the College Football Playoff. The loser would not reach either.

And to make things even more heated, Wolverines head coach Jim Harbaugh has never beat the Buckeyes and his team is on an eight-year losing streak. To say that tensions were heightened would be an understatment.

Michigan jumped out to a 14-13 lead at halftime, and as the two teams took the field for the second half, a chaotic skirmish unfolded in the tunnel. That mayhem carried onto the field just moments later.

After running a play on 1st-and-goal, Wolverines wide receiver Roman Wilson clearly held the ankles of Buckeyes cornerback Cameron Brown. In response, Brown stood up and ripped the helmet off of Wilson.

This is what started the scuffle between Michigan and Ohio State 👀 pic.twitter.com/r5C2dSgf4h

Of course, Michigan was not happy with what went down and Ohio State was frustrated by the initial ankle-grab. As a result, a semi-bench-clearing kerfuffle immediately followed the helmet-ripping incident.

Both sides pushed and shoved for a moment while Brown was pulled away from the pile. As Brown was being moved aside by his teammates, Michigan tight end Erick All ran in to get his money’s worth.

Brown received an unsportsmanlike conduct penalty and the ball was moved closer to the goal line.

Michigan scored on the next play.