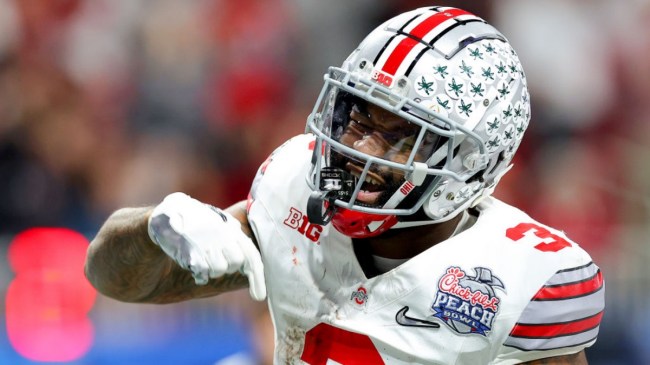 This past week has been one the Ohio State Buckeyes would like to forget.

There was a time on Saturday that they looked like they were headed to college football’s title game.

They had a 14-point lead over Georgia heading into the 4th quarter, something no team had ever overcome in the College Football Playoff. A couple of touchdowns and a missed last-second field goal later and the Buckeyes were heading home.

Luckily, it looks like there is some good news starting to come in for Ohio State.

Their team is expected to have some major losses in the offseason. CJ Stroud is heading to the NFL. Jaxon Smith-Njigba will be entering the draft. The Buckeyes will lose both of their offensive tackles to the draft. At least 3 of those players will be taken in the 1st round and possibly all 4.

Today they learned that they’ll at least be getting one of their draft-eligible stars back for the 2023 season. Miyan Williams announced that he’ll be returning to Ohio State for another season instead of entering the NFL Draft.

This season, Miyan Williams was the star of a formidable 3-headed backfield for the Buckeyes. Williams carried the ball 128 times for 825 yards and 14 touchdowns this season, but was unfortunately limited in the Playoff because of an illness.

Those impressive numbers came a year after he averaged an astounding 7.2 yards per carry on 71 rushes in 2021.

With Williams rejoining Dallan Hayden and TreVeyon Henderson and their combined 1124 yards next season, the Buckeyes will once again boast one of college football’s more menacing run games.

They’ll have some questions to answer at quarterback next season as they try to replace Stroud, but their running game will certainly have no issues continuing to operate at a high level in 2023.