Ohio State QB Dwayne Haskins Reacts To Stephen A. Smith’s Remarkably Dumb Take That He’s ‘More Of A Runner Than A Thrower’ 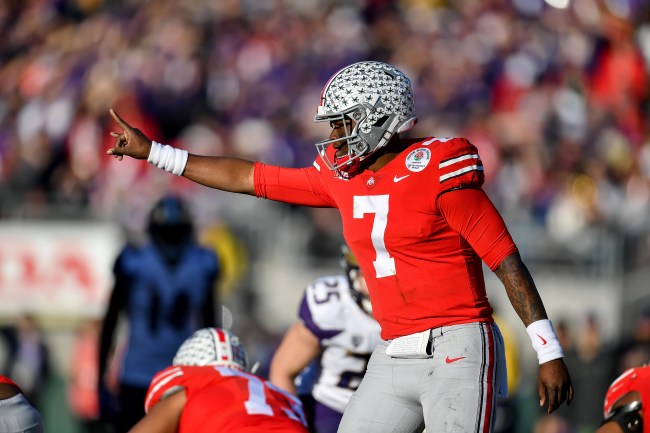 Early this morning ESPN blowhard Stephen A. Smith appeared on ‘Get Up’ to debate which QB he would take in the first round of the draft, Kyler Murray or Dwayne Haskins? During the debate Smith delivered one of the dumbest takes of all-time when he said that he believed that Haskins was more a runner than a thrower despite the fact that Haskins only ran for 105 yards while throwing for over 4500 yards last season.

In which Stephen A. Smith says that Dwayne Haskins is “more of a runner than a thrower.” pic.twitter.com/Gtowi8y0Pp

Of course Stephen A got flamed for his dumb take.

"I just find him to be more of a runner than a thrower … I could be wrong about that."

Might as well say "I didn't watch one second of an Ohio State game last year." https://t.co/ZRZQ37nMML

Stephen A. Smith has a point here. Dwayne Haskins really started having to rely on his legs more than his arm after losing his favorite receiver, Hunter Henry. https://t.co/DNzvHfbJCa

Dwayne Haskins had 50 TDs, almost 5,000 passing yard and only 1.4 yards per carry but he's "more of a runner than a passer"?pic.twitter.com/hKKvxAvveb

Even Haskins himself got in on the fun.

Stephen A. would go on to double down on his take that Haskins was more of a runner than a passer on Twitter.

Haskins is bigtime. I know this. And I’m not saying he CAN’T pass. But I view him the way I view him. Just an eye-test thing. Im not talking statistically. Make of it what you will. https://t.co/9u6GZxnuYg

It’s obvious that Stepnen A. didn’t watch a lick of Ohio State football last season and shouldn’t be allowed to talk about Haskins throughout the NFL draft.