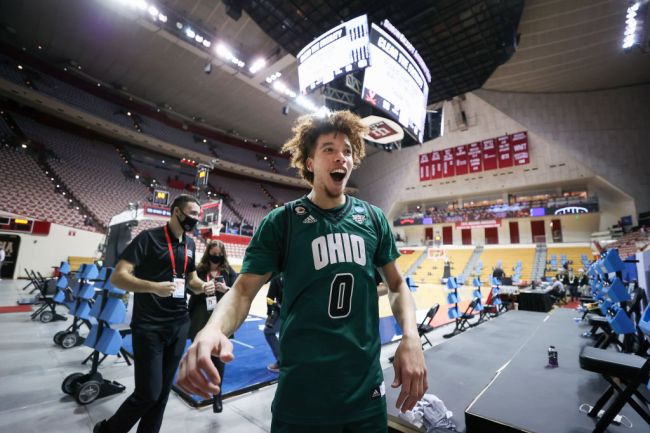 14-seed Ohio University upset 4-seed Virginia in the First Round of March Madness on Saturday. The Cavaliers were dealing with a COVID-19 outbreak that forced them to withdrawal from the ACC Tournament, and kept the team from traveling to the NCAA Tournament bubble until Friday, but they were ready to go for an epic back-and-forth battle come tip-off. Between the unusual circumstances, and one particular player, the Bobcats were a popular pick to pull the upset— and they did.

While the madness was exactly that, the story behind the win is even greater. At the forefront of the incredible victory was junior point guard Jason Preston, who wouldn’t have played Division I college basketball if not for Ohio. His basketball-loving mother Judith passed away from lung cancer in 2015, which began an unusual path to the NCAA and kept him grounded along the way.

His father was not in the picture when tragedy struck and his aunt, who moved from Jamaica to Florida, was named his guardian. Preston lived with his mom’s best friend’s son in an apartment in Orlando during his final years of high school and was averaging only two points per game as 6-foot-0, 140-pound senior. With no plans of continuing his basketball career, he enrolled at UCF as a student.

However, when his friend’s team was short one guy for an AAU tournament, he asked Preston to play. This was two weeks before classes were to begin for his freshman year of college. Preston agreed to fill in and played really well. He almost accepted an offer to play at a Division II school after the tournament, but received interest from a coach who advised him to forgo his immediate college plans and play a year of prep school basketball. Adhering to the advice, and following his and his mom’s love for the game, he enrolled at a sports academy in Tennessee and made an immediate impact.

At the school, there were four teams— with the A team being potential college prospects and the D team being pickup game equivalent. He began on the C team but played well and was quickly moved up, before playing well again and reaching the A team. Preston was moved back down to the C team after some time on the highest level and dropped a triple-double in his first game back.

Without a single offer on the table, he made his own highlight tape and posted it on Twitter with hopes of getting a look. Ohio University was the only DI school to give him a shot and announced him as a part of the program in 2018. Preston immediately packed on 20 pounds of muscle and started at point guard in his first collegiate game. If the story ended there, it would be remarkable, but it keeps getting better.

He had a solid freshman year and had strong sophomore campaign before it was cut short due to COVID-19. Preston returned this season and averaged a team-high 16.6 points per game, adding 7.2 assists (sixth-best in the nation), 1.6 steals and 6.8 rebounds. He shot over 40.8 percent from beyond the arc in the regular season and earned MAC Tournament MVP honors after leading the fifth-seeded Bobcats to their first NCAA Tournament birth in nine years.

Jason Preston with one of the most dominant conference tournament performances you will ever see … taking out 3 higher seeds in the process. Just toying with the Buffalo defense pic.twitter.com/eqieNiIGs9

Today, Preston stands 6-foot-4, 187 pounds and led an upset over the reigning national champions with 11 points, 13 rebounds and 8 assists.

This is why we love March Madness. The improbable becomes reality and players like Preston get to have their story told on the national level. He is a legitimate NBA prospect and will continue to dance alongside his Bobcat teammates as they face 5-seed Creighton in the Second Round.