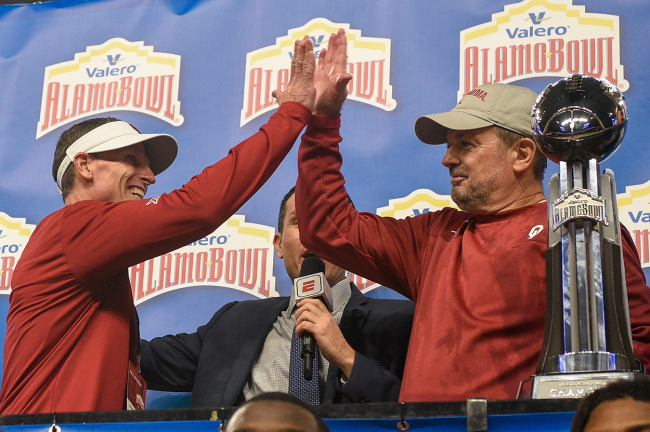 When the NCAA implemented its new rules on Name, Image and Likeness, it changed the entire landscape of college football. In years prior, college athletes were held captive under the title ‘student-athletes.

The purposefully equivocal “student-athlete” term came into existence in the 1950s and implies that they are neither students playing sport, nor a sportsman at work. As athletes, they must reach the academic standards of their peers, but as students, they must not be compensated for anything beyond cost of studies and livelihood.

College athletes were thus tangled in a vague web of NCAA bylaws that hold them hostage in a business model that does not compensate its employees in salary, but profits from their product to the tune of a billion dollars in revenue. In many ways, that is still the case.

However, with NIL, the compensation can come through alternative means. Athletes can make paid appearances, promote a business or brand in exchange for money, or sell their own merchandise.

It has been a huge game-changer in college football in particular. Players are able to make a lot of money at their respective schools without any cap to their earnings.

It also has changed the game in terms of recruiting, but that’s a whole different discussion.

The most important component of NIL is that it allows college athletes to make money while still in school.

Oklahoma’s new head coach Brent Venables recognizes what a positive thing that it can be and offered a very refreshing take earlier this week.

“That’s fantastic. Why would that be a bad thing? There’s many guys come and they don’t have a way to get from A to B to C. They don’t have a car. I took out a loan. I walked on. I got a loan. Even after I got my scholarship, I was a Pell Grant recipient and I was maxed out. I took advantage of every loan there was. Because my family couldn’t give me any money. I wanted to have, like, a normal life as a young person growing up. I wanted to go on a date, I wanted to buy some clothes. So I took out a loan thinking I’m gonna get me a good job somewhere down the road and I can pay it back. And I did that until I was 37-38 years old, paying back student loans. So I get it. I totally get it. And we’ve made things better. The cost of attendance is a little more money in their pockets.”

In addition, Venables shared a cool new tradition for the Sooners.

As a head coach in the NIL era, he is going to get each of his players a new, custom fitted suit every year to be worn on gameday.

“Man, we’re gonna every player on our team in a brand new suit every year. Gonna bring in a tailor and measure ‘em up. Man, they deserve that. Gonna make ‘em put a coat and tie on and represent this university and themselves in the right way. And we’re gonna pay for it.”

He also discussed how the players are going to be given every opportunity to succeed with top-of-the-line resources.

“We’ve finally smartened up on nutrition. Made no limits on nutrition. So that’s a good thing … We’re gonna give ‘em the best resources in the classroom and the things that go along with that, whether that’s a computer or iPad and all those types of things. They deserve the best resources, the best nutrition, the best facilities, the best sports science. Because we’re expecting them to meet our expectations. And I know — and everybody here on this call knows — what the expectations are here are at the University of Oklahoma. I know what those look like very clearly. So our commitment to them needs to exceed those expectations. Period.”

Venables has only been the head coach in Norman for a few months but he is already making a huge impact.