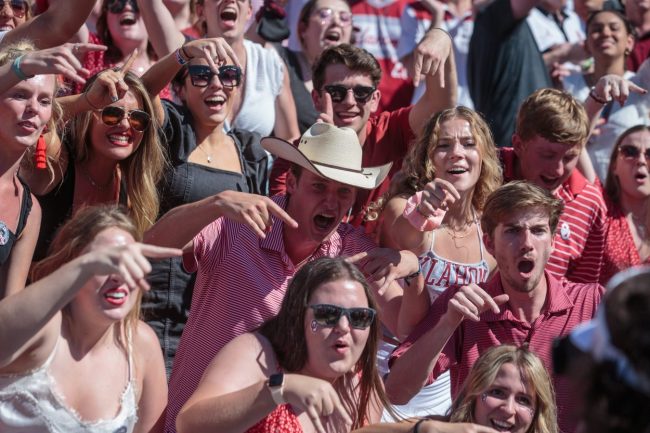 Oklahoma football, despite its struggles, finished the 2021 season at 10-2 and earned a birth to the Alamo Bowl. The Sooners will face the Oregon Ducks on Wednesday night in a bowl game that is admittedly strange.

Both teams had their head coaches leave for bigger opportunities (more money) and the game will be coached by two interim staffs. Additionally, both sides have seen opt-outs from players who have either entered the transfer portal or are projected to go early in the NFL Draft.

As a result, what is going to happen in the game is uncertain. It is really up for grabs and either side could emerge victorious.

One thing, however, is very, very certain— Texas is not playing in the game.

Despite the fact that the Longhorns are not playing in the Alamo Bowl, one UT fan and his family are in San Antonio. It is unclear as to whether he lives there, or booked his vacation too early and was unable to cancel.

Either way, the Texas fan wore his burnt orange shirt for a stroll on the riverwalk with his wife and children on Monday. He proceeded to have his brain broken by a group of Oklahoma fans who chanted in his direction.

OU linebacker Brayden Willis posted a video of the encounter and it is hilarious. As the Longhorns fan walks by, the Sooners fans chant at him “CASEY SUCKS *CLAP CLAP CLAPCLAPCLAP*” in reference to Texas’ 2021 starting quarterback Casey Thompson.

Instead of just walking by with his head down, the red-faced Longhorn turns in their direction and throws the “horns down,” in an effort to mock the Sooners fans. I think? Why he chose to do a hand signal that is disparaging to his own team is unclear, but it was extremely funny.

His brain melted down on him and he lost his mind. Meanwhile, his wife was horrified and had to pull him away.

Win or lose in the Alamo Bowl, Oklahoma beat Texas twice this year.