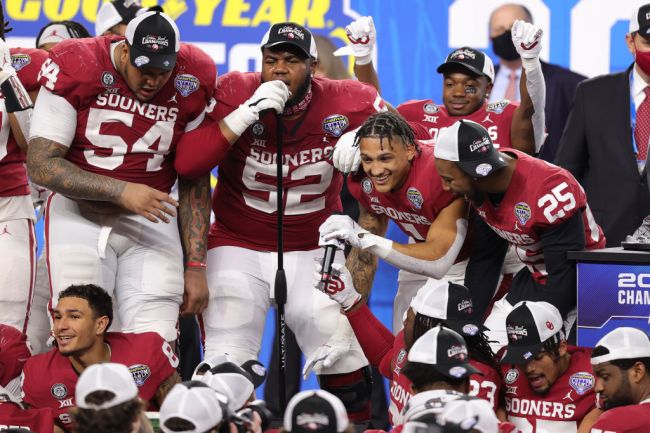 No. 7 Oklahoma football put a whooping on No. 8 Florida in the Cotton Bowl on Wednesday night. The Sooners went ahead 17-0 in the first quarter after three interceptions from Gators quarterback and Heisman Trophy candidate Kyle Trask and never looked back, going on to win 55-20. Senior running back Rhamondre Stevenson led the team with 18 carries for 186 yards and a touchdown alongside freshman quarterback Spencer Rattler’s 247 yards and three touchdowns on 14 completions. Head coach Lincoln Riley had his team fired up from the jump and defensive coordinator Alex Grinch put his opponents in a twist. It was a beat down.

Oklahoma fans broke out the “S-E-C” chants. It’s getting ugly in the streets pic.twitter.com/GSFjsBHCbn

Now, Florida’s top four receiving options and much of the defense were out due to COVID-19, injury or opt-out, but Trask looked lost and the answer for Oklahoma’s average of 11.4 yards per play was nonexistent. Things got ugly fast and Dan Mullen’s team was exposed in the first New Year’s Six bowl game of the 2020 season.

After the game, as the Sooners were waiting to receive the Cotton Bowl trophy, some of the players started to rap on stage. The rest of the team started to join in and it quickly became a thunderous chorus of the famous Malcom Kelly locker room freestyle.

The Sooners went crazy and broke out the Malcom Kelly freestyle rap during the postgame celebration. 🔊pic.twitter.com/wlbogEkGlb

The rap first made an appearance after the 2006 Big 12 Championship, when Kelly hauled in two touchdown passes in a 21-7 win over No. 19 Nebraska. Donning their championship hats after the game, Oklahoma players circled around their top receiver and hyped him up as he delivered an epic freestyle rap.

Lyrics shoutout his hometown, call out the Cornhuskers and give props to his teammates.

The rap has since taken on a life of its own and has become a proud part of Oklahoma’s culture. It made for an epic postgame celebration on Thursday.