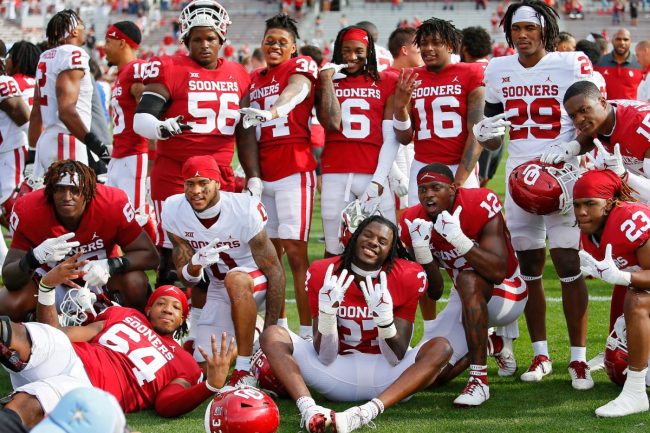 The Oklahoma football team made some offseason waves on social media Thursday with the release of an awesome hype video for the upcoming season. The clip shows a number of players posting their preseason weights in a scene that looked more similar to a boxing weigh-in session ahead of a big fight as opposed to a college football locker room.

This appears to be something new done under the incoming coaching staff. The Sooners are moving on from Lincoln Riley to Brent Venables this year after a tumultuous ending to the 2021 season. While the team won 11 games, they saw Riley bolt for USC, taking starting quarterback Caleb Williams with him.

Now, they’ll look to make a fresh start under Venables, who helped the Clemson Tigers land a pair of national championships as defensive coordinator.

Whatever the staff is doing appears to be working as the team seems to be enjoying their time together. Oklahoma fans were quick to comment on the electric weigh-in video as they get excited for the future.

After seeing the Oklahoma weigh-in video, many Sooner fans are buying into the hype.

So cool to see a team this pumped up about S&C results! Greatness starts at the foundation! Definitely more successful building on solid ground! #BOOMER https://t.co/7m6hJjO4UO

I know a lot of folks think Sooner fans are delusional saying we're going to be even better…but it's small things like this which are the 'proof in the pudding.' It's going to be fun to watch. 😎 https://t.co/4VZ3SZYpNy

Feel SORRY for UTEP when this team finally gets on the field. Violence, Violence💯 https://t.co/pjZmjWfLDs

For Sooner fans, the season can’t start soon enough. We’ll see if these new gains in the weight room help on the field.