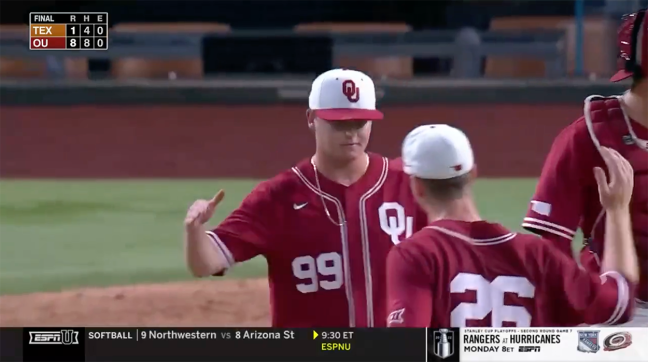 Oklahoma baseball went undefeated in the Big-12 Conference Tournament and dominated their way into an automatic NCAA Tournament bid. And to do so, the Sooners took down their biggest rivals in grand fashion on the biggest stage.

After storming through West Virginia, Texas Tech and Kansas State during the week, Oklahoma faced Texas in the tournament final on Sunday night. There was a lot of tension between the two sides, as there always is, and it came to a boiling point in the ninth inning.

The Longhorns opened the scoring in the top of the first with the first run of the game, but the Sooners blew things open shortly thereafter and it was all-but over. Over the course of the third inning, Oklahoma sent 11 batters to the plate and scored eight runs before an out was even recorded.

The 8-1 score held true all the way through the remainder of the game and the Sooners won the Big-12 Tournament. Before the two teams left the diamond, however, they had some choice hand signals for their rivals.

Trevin Michael came in to close things out in the final half of the ninth inning and struck out two batters in the process— including Texas’ final hitter of the game. After doing so, he proceeded to turn to the Longhorns dugout, swiped across his chest to let them know who is boss and threw a vicious ‘Horns Down’ in their direction.

There has been a murder! 🤘👇 pic.twitter.com/UUour3AhXw

OKLAHOMA WIN THE BIG 12 TOURNAMENT AND THEN THEIR CLOSER GIVES THE HORNS DOWN 👀 @OU_Baseball pic.twitter.com/X3BJFNcjp7

Both Texas and Oklahoma will be in the NCAA Tournament, but only the latter can claim the win over their rivals to win the conference. Horns DOWN!