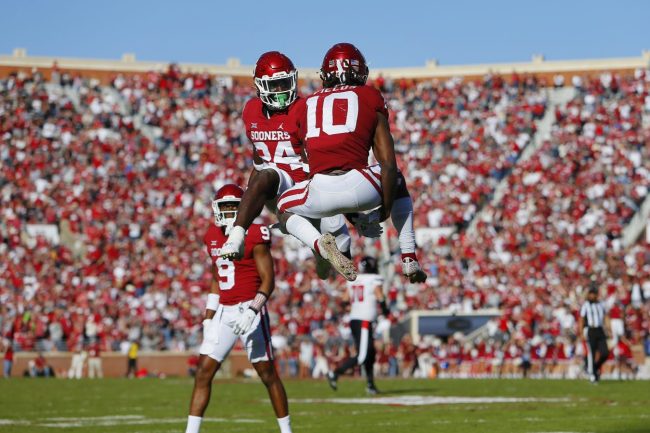 A big part of the college football bowl experience is getting the players out to see the town. Earlier this week, Oklahoma and Oregon got to experience the city of San Antonio ahead of the Alamo Bowl on Wednesday night.

Not only did the players go crazy in an ELECTRIC dance-off, but they also got to participate in a boat parade on the riverwalk. Both teams got in their respective team-colored boats and floated down the famous landmark.

However, when the Ducks and Sooners passed each other, it got a little bit chippy. An Oklahoma player picked one of the Oregon lineman out of the crowd and delivered an all-time chirp.

As the two teams passed one another, the OU player pointed at the big fella and yelled “Hey, I KNOW you’re a walk-on.” It sent the Sooners into a fit of laughter, and it was so funny that even the Ducks couldn’t stifle their laughter.

The chirp, which came out of absolutely nowhere, really could not have been funnier. But the lineman who was at the butt of the joke did not see the humor.

He stood up, red-faced, and started screaming at Oklahoma’s chirp artist. His yelling was drowned out by the howling laughs, but he was very angry.

Oklahoma and Oregon will battle it out on the gridiron on Wednesday night. Unfortunately for the walk-on, he likely won’t get his chance at revenge and will have to stew on the sideline.