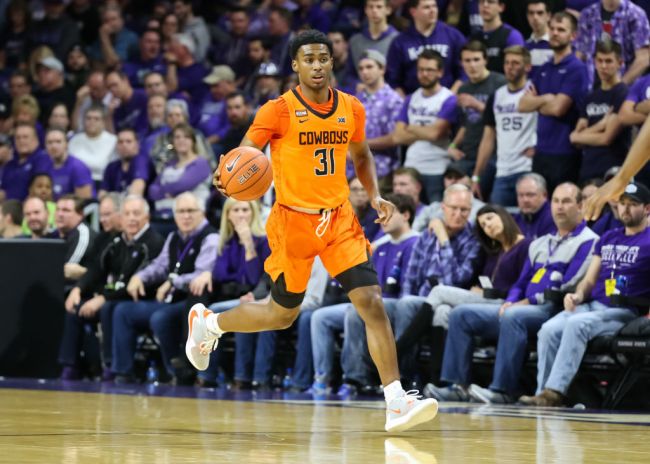 Oklahoma State basketball walk-on Dee Mitchell has been working at Walmart since last summer to help pay for his education in Stillwater. That all changed in the middle of his 1:00-10:00 p.m. shift on Sunday when head coach Mike Boynton and his staff showed up at his work to surprise him with a scholarship. His teammates were there by way of Zoom call and Mitchell was brought to tears.

Nobody works harder than Dee Mitchell. He joined the Cowboys as a walk-on this day in 2019, and is paying his way through school thanks to his job at @Walmart.

The junior guard asked his coach if he could try out for the team in 2018 and was told that there was no room. However, a few months later, Boyton held open tryouts after three player swere released from the team. Mitchell earned himself a spot on the team and made the roster again in 2019-20 as a walk-on. He has since appeared in 23 games over his three seasons with the Cowboys and has won over the team.

The 6-foot-2 Texas-native played a career-high 17 minutes against TCU last February and finished a game-high +18 plus/minus without taking a shot. His lockdown defense earned him coach Boyton’s game MVP honors and has stood out amongst the staff.

Though Mitchell has only played in just one game and been on the bench twice this season, his presence and hard work was enough to prove him worthy of the scholarship spot. He acknowledged coach Boyton’s influence on his life after receiving the news.

“It meant everything to see my mom,” Mitchell said after calling his mom to share. “I didn’t know what was going on. It was real surprising. It’s breathtaking … I really admire Coach Mike, and I look up to him. I plan to be someone like him in the future, hopefully touch people the way he touched me.”

Oklahoma State paused team activities due to COVID-19 concerns last week, but Mitchell hadn’t been around the team much at all and was not included in the contact tracing. The Cowboys opted not to dress walk-on players due to the pandemic, which ultimately allowed him to continue to work at his job while his teammates were in isolation. He will join the team as a scholarship player when they return to practice.