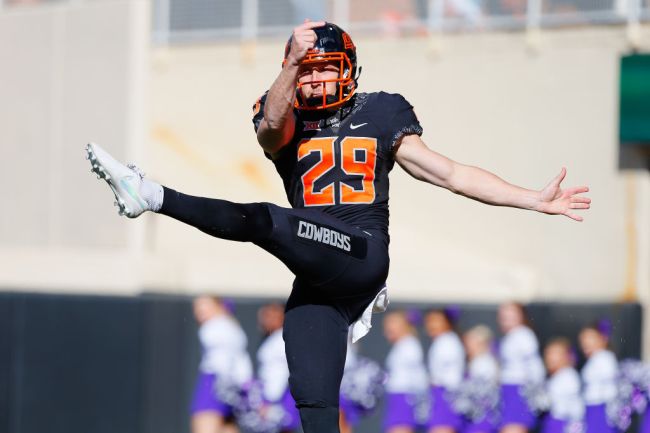 Oklahoma State punter Tom Hutton might be the oldest junior in college football, if not the oldest player period. The 31-year-old takes the title after 33-year-old University of Colorado kicker James Stefanou retired last fall and he’s hilarious.

Hutton, who was born in Australia, has had quite the journey to the NCAA ranks.

From Aussie to American.

Prior to his time in the United States, he played Australian-rules football with Yallourn-Yallourn North in the Mid Gippsland Football League. If you are unfamiliar sport, here is a good breakdown.

During his seven years with the senior club, Hutton scored 124 goals in 108 matches. After his playing career came to a close, he decided to give American football a try and went through the ProKick Australia program. The program has been synonymous with some of college football’s best punters and helps land Australian players a scholarship in the United States.

“I was told about [American football] a few years ago so I thought ‘I’ll probably be too old for it now’, thinking that it was like Aussie Rules and that if you were over 21 then you had no chance,” he said back in 2018. “But then I saw a few older blokes getting scholarships so I thought I may as well give it a go.”

Hutton was working in a paper mill at the time when Oklahoma State gave him an opportunity that he has not squandered. He’s not necessarily the biggest leg in the NCAA, but he jams opponents into uncomfortable positions.

At one point, during the Cowboys’ game against West Virginia, Hutton was called on for his fifth punt of the game and thought that the crowd was cheering for his return to the field. They, hilariously, were not.

Ran on the field for my 5th punt yesterday to hear the fans cheering and applauding when the announcer called my name.

Looked up to see there was a pigeon on the field, being shown on the big screen behind me.

They were cheering the pigeon.

Turning focus to the fall.

As he gears up for 2021, Hutton is working very hard to get up to form. He and his fellow special teamers are going through some very intense workouts.

Step inside the grueling intensity of a Cowboy football special teams workout … if you dare. 🤣#LetsRide I #GoPokes pic.twitter.com/JwUTLT7iou

Oklahoma State opens its 2021 campaign against Missouri State on September 4th. Ideally, against an FCS opponent, the Pokes won’t need to punt too often.