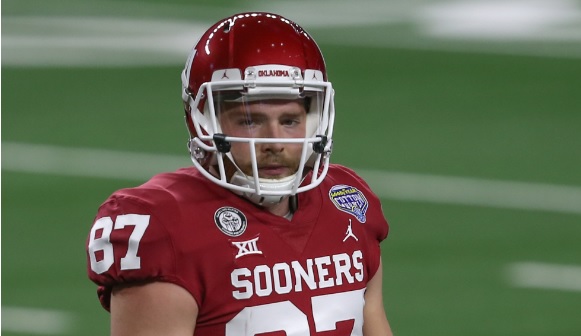 Oklahoma wide receiver Spencer Jones was involved in a wild brawl at a bathroom bar earlier this month and reportedly suffered a serious eye injury during the altercation.

On Friday a video surfaced on social media shows Jones getting punched, slammed, and put in a chokehold after a heated argument with a man in the bathroom of Norman’s Logies.

Late Friday, Feb. 19, undated video surfaced on Twitter showing Jones involved in a fight in the bathroom at Norman’s Logies on the Corner, a Campus Corner bar at 749 Asp Ave., within walking distance of OU’s Gaylord Family-Oklahoma Memorial Stadium. After a verbal argument, Jones was assaulted by another patron who took him to the ground and repeatedly hit him in the face before placing him in a chokehold.

The Daily learned late Saturday that the altercation between Jones and his assailant occurred in the late hours between Saturday, Feb. 13 and Sunday, Feb. 14. Following the incident, Jones sought aid from OU’s athletic trainers.

Jones was forced to see Dr. Perry Brooks of Norman, who specializes in facial reconstruction because his eye was so jacked up.

“Dr. Brooks came out of that surgery saying he’s extraordinarily lucky at this point, that he’s lucky he didn’t lose the eye altogether,” Glass said. “And so he was able to do some things surgically to rebuild that orbital socket and thinks everything is eventually going to come back to normal, but it’s going to take a while for him to fully recover.”

Oklahoma-based lawyer Woodrow “Woody” Glass is representing Jones and says his client was the victim of an assault after trying to de-escalate a heated situation.

Glass said a police investigation into the matter is ongoing, but he could not provide any further details. The Daily reached out to Norman Public Information Officer Sarah Jensen late Saturday about the investigation but was told, as it was a non-emergency matter, the department would not comment until Monday at the earliest. Glass also said the cause of the altercation is still murky, but that Jones was “trying to be a peacekeeper.”

The video begins with Jones telling his assailant to “Get the f*** out of here,” before the perpetrator wiped blood from his face on Jones and initiated his attack.

“He was trying to de-escalate that situation,” Glass told The Daily. “But unfortunately, it wasn’t de-escalated despite his best efforts, and he became the victim of this vicious assault you’ve seen.”