Oklahoma’s Brent Venables Tries To One-Up Jim Harbaugh, Works Out In Button Down At Recruiting Visit 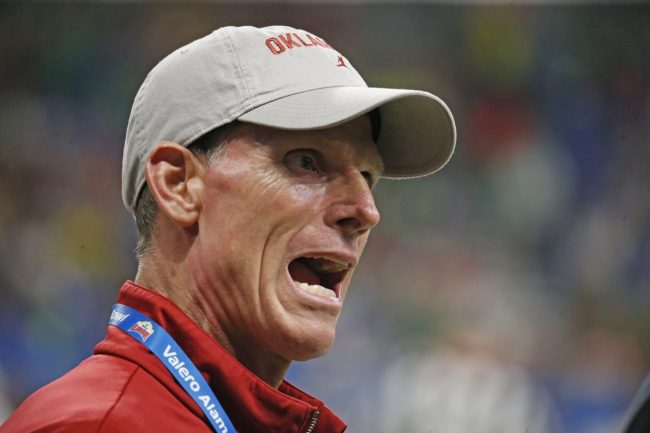 Brent Venables has been the head coach of Oklahoma for less than two months and he’s already being a hardo. Venables, 51, succumbed to peer pressure on Thursday morning while visiting a high school in Florida on a recruiting trip.

While in the Sunshine State, Harbaugh pulled one of his most absurd moves yet. He, in a button down and dress slacks, hit the squat rack. It was pretty weird.

Well, the recruiting contact period wraps up in the next week, so coaches are trying to get in as many visits as they can before it closes. Venables is among them and followed in Harbaugh’s shoes.

The Sooners’ head coach flew down to Tampa on Wednesday and swung by Jesuit for the same reason as Harbaugh. He wanted to check-in on Bowles.

While there, the staff and players in the room likely joked with Venables about hitting one of the weight racks and gave him a hard time about “well Harbaugh did it!” Or, which would make things even weirder, Venables voluntarily offered to try and one-up Harbaugh.

Either way, Venables, also in a button down and slacks, walked over to the rack and knocked out 10 neutral-grip pull-ups.

It was a super funny, super weird move. Especially because he went second.

The word is out among college coaches – Jesuit's Oliva Weight Room is the place to get your workout while on the road recruiting.

There is some credit that needs to be given to Harbaugh and Venables. Yes, both of their decisions to get in a workout while visiting a recruit is odd, but recruiting is tough. And if you’re in a heated battle over a target, you’re going to do whatever it takes to try and get him in the boat.