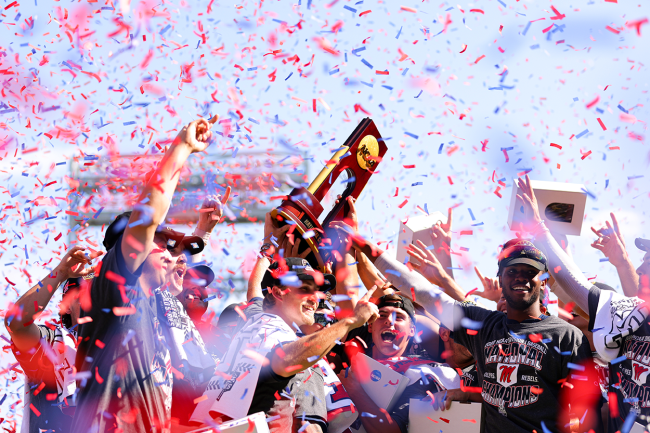 Ole Miss baseball won a national championship on Sunday for the first time in program history. But it was not the only national title that the Rebels took home from Omaha.

Across the street from where the games were being played, the unofficially official Jell-O Shot National Championship was held at a local bar. Rocco’s Pizza & Cantina began the challenge a few years ago and it absolutely took off this summer.

The concept is simple— every school at the College World Series is put up on a white board. For every Jell-O shot that is purchased by one of the eight fanbases, that tally is added to their total. The school that downs the most Jell-O shots wins.

It quickly became a two-school race this year between Arkansas and Ole Miss. The Razorbacks got out to a hot start, but the Rebels quickly started to catch up as their team took the field in Omaha for the first time and the early numbers were insane.

Mississippi State fans set the all-time record last year at just short of 3,000 over the course of more than a week. That number was demolished by both fanbases in an astonishing amount of time this year.

From that point on, the Rocco’s Jell-O Shot Challenge went back-and-forth.

Both Arkansas and Ole Miss had multiple “Jell-O shot boosters” pony up thousands of dollars to increase their school’s total.

And then it became a blowout. On Thursday of last week, the Rebels baseball team eliminated the Razorbacks baseball team from the College World Series and the Hogs fans went home.

As Ole Miss went on to win the national championship, its fanbase only continued to grow. As did the number of Jell-O shots, and Lane Kiffin even used the ridiculous total as a recruiting tactic because Ole Miss never loses a party.

When Rocco’s ran out of Jell-O, Ole Miss had crushed 16,174 shots. That was just shy of 8,000 more than Arkansas’ second-place number.

Welp, we are out of jello, but we are still rolling! Old School Ole Miss Shots still count towards the total! Let's push it to 20k! #CWS2022 #CWSS #RoccosOmaha pic.twitter.com/bHCAWXqeTZ

After running out of Jell-O, Rocco’s started counting old school, normal shots. By the end of Sunday evening, the Rebels had surpassed 18,000.

And to close things out on Monday, here is the final tally:

Ladies and Gentlemen your OFFICIAL 2022 Rocco's Jello Shot Challenge. Congrats to @OleMissBSB for their victory on the field and their fans for the victory across the street at Rocco's. It was a special year and we couldn't be more thankful for y'all. #CWS2022 #CWSS #RoccosOmaha pic.twitter.com/XuloBnXmDM

However, we won’t count the additional shots for sake of this article. Ole Miss finished with 16,174 Jell-O shots, which comes out to a total of $72,783 from the Rebels alone.

A note from the owners about how great y'all have been. #CWS2022 #CWSS #RoccoOmaha pic.twitter.com/seOcqiRjYL

As does the company who makes the shots.

For everyone wondering how in the hell we keep up with the demand of making all these shots, the secret is we don't. We buy @slrrrp brand pre-made shots. They have decided to join us in giving back and will donate $1 for every shot sold this weekend to the food banks. Let's Go! pic.twitter.com/GgeQmTdEnh