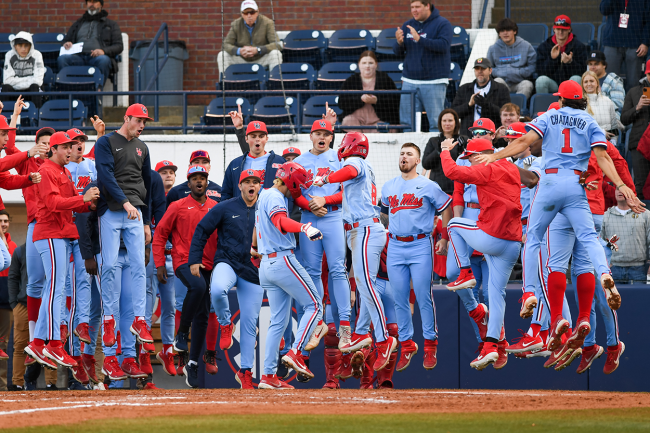 Rocco’s Pizza & Cantina in Omaha, Nebraska is making a fortune off of the SEC West this week. As the College World Series continues to play out at Charles Schwab Field, a ridiculously profitable Jell-O shot competition has broken out within the bar.

Rocco’s which is located directly across the street from the College World Series, is raking in the dough. It started the ‘JELLO SHOT CHALLENGE’ a few years back and it is really starting to gain momentum.

Every fanbase in the College World Series competes to consume as many Jell-O shots as possible.

Now, each shot is store-bought and sells for $4.50— which is about a 350% markup. However, according to people who are in Omaha this weekend, it’s the best deal going.

A pint of Busch beer is $8 and a well mixed drink is $9. The Jell-O shots are half of the price and they are 13% alcohol, so they get you where you want to be.

Last year, as Mississippi State made its National Championship run, Bulldogs fans sucked down an all-time record 2,965 Jell-O shots. That was over the course the entire tournament.

This year, a rivalry between Ole Miss and Arkansas has that record in jeopardy on Day 3.

And then, on Saturday prior to the Razorbacks’ first game of the College World Series, their fanbase took a commanding lead.

But while Arkansas fans were in the stadium, Ole Miss fans got busy.

Once both games had finished, the party did not stop. Both fanbases continued to put back a ridiculous amount of Jell-O shots.

The Rebels, however, were particularly determined to catch the Razorbacks.

"This is all the money in my pocket, put it all towards Ole Miss Shots" #CWS2022 #CWSS #RoccosOmaha pic.twitter.com/ToiDlblE4T

Although neither school broke the all-time record on Day 2, they both got pretty close. It’s neck-and-neck.

Absolutely insane. And to make things even more fun, Arkansas and Ole Miss are set to play one another in their second games of the College World Series on Monday. It’s going to be a madhouse.