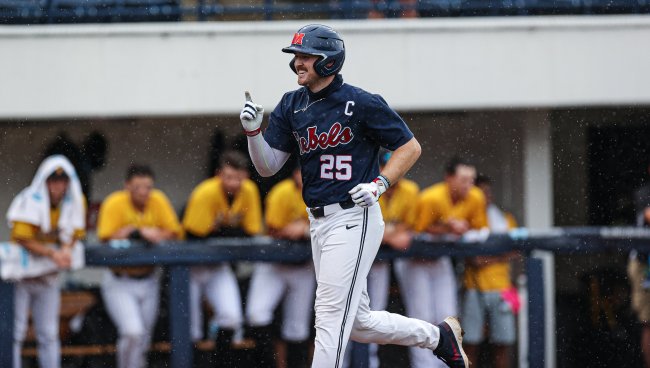 Ole Miss captain Tim Elko is the best story in college baseball right now and his legend only continues to grow. The senior from Florida tore his ACL on April 5th but hasn’t let that stop him from hitting dingers.

Opting to avoid surgery, he sat out for a month before returning to the lineup on May 1st. The way he figured, the injury can’t get any worse. So long as he can get around the bases, he can contribute to the lineup with his bat.

A week later, he hit a home run against Texas A&M as a pinch hitter.

33 days later, he just pinch hit for @OleMissBSB vs. Texas A&M and went DEEP for the oppo taco home run. 🌮

What an incredible story 👏 pic.twitter.com/g39dXs4XfO

His bat stayed hot and he kept hitting. Eventually, head coach Mike Bianco had to put him in the lineup full-time as the DH.

The Rebels made the SEC Tournament as the 5-seed. In the team’s Second Round game, Elko went yard again. Not once, but twice. In the same night. Against the nation’s No. 3-ranked team Vanderbilt.

I DON'T BELIEVE WHAT WE ARE SEEING.

His first moonshot went SO deep, that it was found in the woods hours later.

Ole Miss went on to fall in the SEC semifinal round but was selected to host an NCAA Regional. The legend continued and he led the team in slugging and on-base percentage entering the weekend.

Elko got up to bat in the bottom of the third inning of the opening round with the bases juiced. He sent a towering bomb into right field and the full-capacity student section went WILD. It resulted in a MASSIVE beer shower, which is one of the best traditions in sports.

Not only can he hit, but Elko is a stand-up guy who waited his turn to start and is beloved by everyone. While he rounded first base, he gave a point to the fans over the wall. It was epic.

Ole Miss beat SEMO and Florida State to go 2-0 in the Regional before losing to 2-1 Southern Miss. It is a double elimination bracket, so a winner-take-all game between the two Mississippi schools was set for Monday and would determine who was to advance to.

After jumping out to a 5-0 lead, the Rebels loaded the bases in the bottom of the 2nd inning. As it would be, Elko stepped up to the dish and hit another grand slam.

In four games over four days, Elko hit more grand slams than he has ACLs intact. You can’t write it any better.

Oh wait, you can. Two innings later, this time with the bases empty (boring), he went yard again.

You cannot be serious. 😧