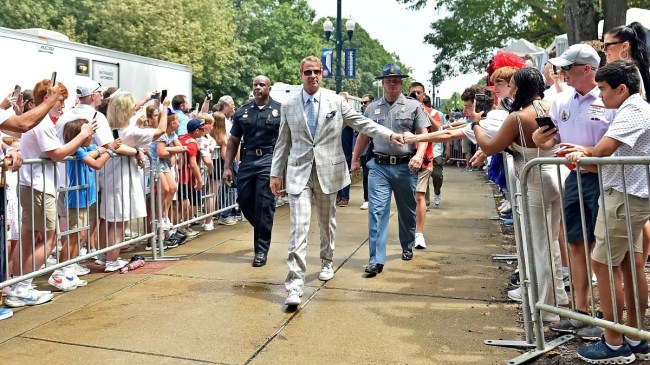 By now, you’ve probably read a good bit about Ole Miss head coach Lane Kiffin. Kiffin, who is perhaps the most gregarious head coach in all of college football, has led the Rebels for each of the last three seasons after being hired in 2020. He took the program to the Sugar Bowl a year ago and looks strong yet again in 2022.

But he may not be long for the job. That’s because reports are rampant that Kiffin is set to leave Ole Miss to become the next head coach at SEC rival Auburn. Kiffin has since shot down those reports in a way that only he could. But they don’t seem to be going away anytime soon.

The Tigers, meanwhile, are on the prowl for a new head coach after firing previous head coach Bryan Harsin less than two years after he was fired. Program legend Cadillac Williams was named the interim head coach. Though he’s not expected to remain the coach long term. Reports also link Deion Sanders to the vacant Auburn job, but Kiffin is the name that keeps coming to the forefront.

That has angered Ole Miss fans, who are now preparing to wage war with Kiffin.

The Rebels welcome hated in-state rival Mississippi State to Vaught-Hemingway stadium on Friday for the Egg Bowl. And one fan wants Kiffin to know that he’s not welcome there if his plan is just to leave shortly after the game ends.

The fan suggested that others bring mustard to the game and throw it at Kiffin. The idea, of course, comes from an incident last year where Tennessee fans threw various objects at Kiffin, including a bottle of mustard.

Now, we can’t advise fans to throw anything at coaches. It’s a bad idea altogether. But of all the things to be hit with, mustard would probably be one of the worse. It’s gross. It smells. And it’s probably pretty difficult to wash out.

If those threats don’t convince Kiffin to hang around in Oxford, nothing will.