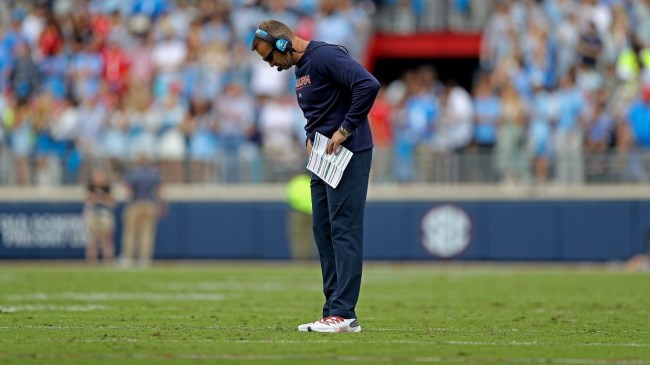 Harsin finishes his Auburn tenure with a 9-12 record. But in reality, his run was doomed from the start. Then-Tigers Athletic Director Allen Greene hired Harsin in 2021 after firing previous head coach Gus Malzahn. Harsin came to Auburn after seven successful, if unspectacular years as the head coach at Boise State.

But he had just one prior year of experience working in the southeast, which concerned Tigers fans about his ability to recruit in SEC country.

After a tumultuous 2021 season that saw Auburn lose its last five games and finish with a 6-7 record, those fears came to life. Auburn signed just the 21st-ranked recruiting class in the country according to 247Sports.

But that was just the start of Harsin’s troubles. A number of players, including starting QB Bo Nix, transferred out of the program. That sparked an investigation by the university into his behavior. Though Harsin continually reaffirmed his innocence. There were also rumors about his personal life which sparked a scathing response from both his wife and daughter.

Things reached a boiling point when Harsin and the Tigers returned to the field for the 2022 season. Auburn began the year 2-0, but a Week 3 blowout loss to Penn State sent fans over the edge.

Multiple losses and yet another wild report later, and the Tigers have finally decided to cut bait with the failed coaching hire.

Brandon Marcello of 247Sports first broke the new of Harsin’s firing on Twitter.

BREAKING: Bryan Harsin has been fired at Auburn.

And it didn’t take long for Auburn fans to quickly start the celebrations.

Auburn has yet to name an interim head coach, but fans are already speculating about who gets the job long-term. One popular name seems to be Alabama offensive coordinator Bill O’Brien.

I have the perfect man for the position https://t.co/3UdBFZkrNm pic.twitter.com/pvRkXcZomQ

Though other names such as Matt Rhule…

…and Deion Sanders have been suggested.

It’s not all bad for Harsin, who stands to collect a pretty nice paycheck for having been fired.

Auburn fired Bryan Harsin. They're expected to owe him more than $15 million in buyout money, half of which is due in 30 days.

But for now, Auburn fans just seem happy for it to be over.