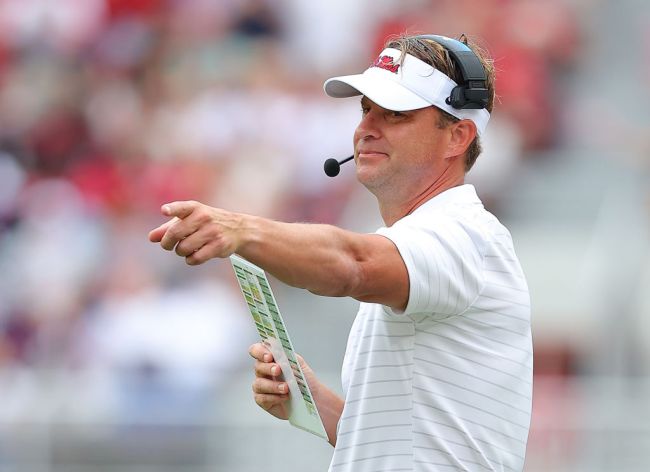 “Get your popcorn ready,” Lane Kiffin said in pregame before losing 42-21 to Alabama last weekend. The comment quickly went viral and, as is per anything surrounding the 46-year-old head coach, headlines were everywhere.

Well, since the disappointing loss (that I attribute to poor offensive play-calling in the first half, but I digress), Kiffin has apologized to Jamie Erdahl for cutting the interview short— even though it didn’t bother her at all. Even before the game, he recognized what he did and told his offensive coordinator (for whom I attribute the poor play-calling) that they needed to back it up.

Obviously, the Rebels did not. It was a pretty comfortable beatdown and Kiffin said that they “forgot to plug the microwave in.”

Immediately after the loss, packages addressed to Kiffin began to hit the mail. Yesterday, he shared just how many gifts he had received that trolled him for his comments.

Let’s just say that Kiffin could host a movie night for his entire team without running out of popcorn.

24 hours later, Ole Miss announced that it is leaning into the joke this weekend. Arkansas travels to Oxford for a Top 25 matchup on Saturday.

This year should be very different because Corral is not nearly the same player, but for whatever reason, these two teams have played extremely tight over the last seven years or so.

Arkansas fans think it’s a rivalry, but it’s not. That doesn’t mean it won’t be a good game and it should be entertaining.

Ole Miss is choosing to play into the headlines and will offer FREE popcorn the first 5,000 fans in the stands on Saturday.

Embrace life it’s to short to be serious!! It’s ok to laugh at yourself. 🏈🔥❤️@OleMissFB https://t.co/GN1shHnNC5

Do we think that Ole Miss is using the popcorn that Kiffin had sent to him? There seems to be plenty!