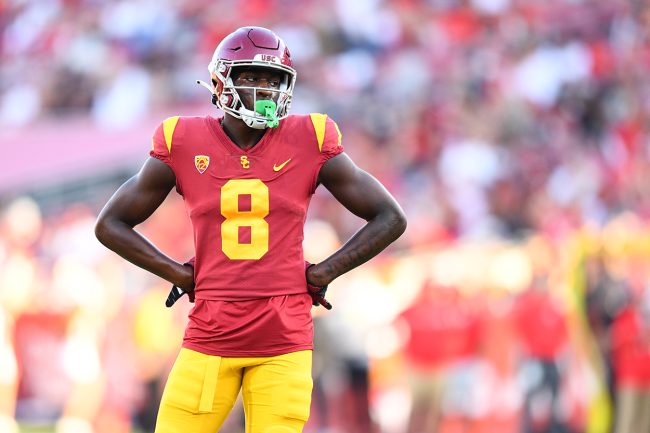 As week two of spring football came to a close at Ole Miss, a few of the Rebels stopped by their head coach’s house for some Sunday afternoon shenanigans. Among them were USC transfers Michael Trigg and Jaxson Dart.

Dart, who is currently in the midst of a quarterback battle, was mostly an on-looker, but Trigg showed off some of his athleticism by dunking all over Lane Kiffin’s son Knox. Trigg, a 6-foot-4, 245-pound tight end is an absolute freak of nature who simply cannot be tackled.

He was also a standout basketball player in high school and could have played the 4 on the collegiate level if he had continued with his career on the hardwood. On Sunday, he threw down all over Knox Kiffin, who stood in and tried his very best to take a charge.

Trigg threw down with authority, but that’s nothing that he hasn’t done before. As a two-sport star at Carrollwood Day High School in Florida, he was averaging more than 20 points per game as a sophomore and junior before turning his focus to football.

Michael Trigg was dunking all over dudes in high school just like he did Knox Kiffin on Sunday.

Michael Trigg took home game MVP honors for @CarrollwoodDay with 21pts, including dunk of the day for #FloridaGetDown Day 1. pic.twitter.com/IXoplr3j1j

Trigg played in only four games as a freshman at USC last season because of an injury. Both he and Dart entered the transfer portal after the season and were a package deal wherever they ended up.

While visiting Ole Miss, the former Trojan duo took some icy photos with Lane Kiffin and his Aston Martin. Not long thereafter, they committed to play in Mississippi.

Kiffin recently spoke about what Trigg brings to the offense and had high praise.

“I don’t, like, tell him this, because everybody says this and has probably told him this forever,” he said. “His potential’s unbelievable. His catching radius and balance and body control, they don’t make many like that in the world. He’s done great things already.”

“And it is crazy, like I told the staff, because we just kind of think of the portal as like free agency like, those are the older ones,” Kiffin went on. “This guy’s in his second semester of college, which is crazy to think about when you see his skillset. So, we’re obviously really excited about him.”

If his athleticism on the gridiron is even half as dominant as he was while dunking on his head coach’s son, he is going to be a problem for opposing defenses.