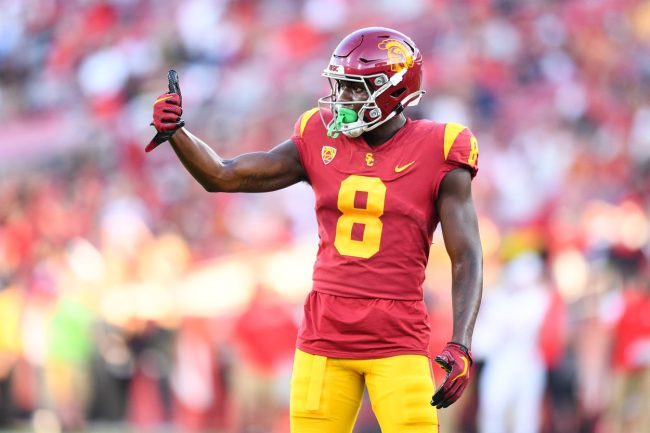 Ole Miss football is coming off of a historic year in 2021. The Rebels, in their second year under head coach Lane Kiffin, claimed its first 10-win season in program history and earned a Sugar Bowl bid.

As the team looks ahead to 2022, the same level of success is very attainable and back-to-back New Year’s Six bowl games is within reach. That is especially true after two high-profile transfers officially commit to play in Oxford.

On January 10th, former USC quarterback Jaxson Dart and his tight end Michael Trigg announced that they were entering the transfer portal. Since then, they have both been linked to the Rebels.

Ole Miss passing game coordinator and tight ends coach John David Baker previously served in a similar role at USC and was integral in both Trigg and Dart’s commitment out of high school. Now he is doing it again in Mississippi.

After the two visited the Dirty ‘Sip on January 16 and took the iciest recruiting photos of all-time with Kiffin, they were both expected to commit to Ole Miss, despite deciding between the Rebels and the Oklahoma Sooners. Now, it appears as though that is a done deal.

Dart officially enrolled at the University of Mississippi on Thursday night and Trigg is not far behind. His name should enter the student database as soon as this afternoon.

Both of their commitments are imminent.

Most people are talking about Dart, because he is the high-profile quarterback worth a lot of money in terms of Name, Image and Likeness. However, Trigg is just as big of a piece to the puzzle.

He is going to live in the nightmares of opposing SEC defenders.

At 6-foot-4, 245-pounds, Trigg is hard to miss. The Florida-native chose initially USC over LSU and South Carolina and was going to play both basketball and football.

In high school, Trigg played guard and brought the ball up the court. That’s rare at his size.

Meanwhile, on the gridiron, he played tight end, defensive end, quarterback and running back. Trigg may or may not try to hoop at Ole Miss but his future, however, is on the gridiron.

Trigg was the No. 3 tight end recruit in the 2021 class, carried a four-star ranking and had offers from Alabama, Auburn, Florida, Georgia, Ohio State, North Carolina, Penn State, Tennessee, Virginia Tech and West Virginia, among others.

It’s easy to see why.

Trigg made one of the most dominant, freak-of-nature plays that you will see all year during summer ball at USC in 2021.

Look at this play and try to imagine anyone in the country successfully tackling this behemoth of a human. Trigg looks like he’s playing against Pop Warner defenders, when in reality, he’s facing the No. 40-ranked defense in the country from 2020.

Here is another look at what makes Trigg so special:

Freshman QB Miller Moss to freshman TE Michael Trigg in one-on-ones today. This is a good example of how Trigg is going to be hard to defend once he settles in at #USC. pic.twitter.com/WLvS9B4lWH

Although his 2021 season was cut short due to injury, he avoided surgery and was able to begin his rehab right away. In his limited time, Trigg made a big impact.

His first collegiate touchdown was a perfect indicator of just how good he is going to be.

The Rebels will surely be ranked in the Top 25 of the preseason poll and that will be in large part because of the impact that Trigg and Dart will have on the offense. Stay tuned because Trigg is about to go off.