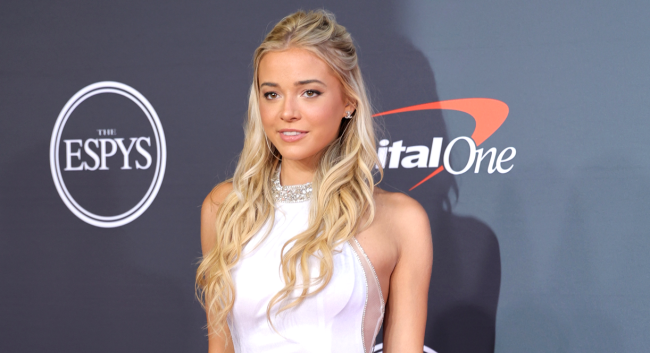 Popular LSU gymnast Olivia Dunne was one of the main subjects in a New York Times story this week talking about female ahtletes and NIL money.

In the article titled “New Endorsements for College Athletes Resurface an Old Concern: Sex Sells,” Olivia Dunne revealed how much money she makes from NIL deals thanks to her over 8 million social media followers.

The story was published with the sub-headline, “Female college athletes are making millions thanks to their large social media followings. But some who have fought for equity in women’s sports worry that their brand building is regressive.”

On Wednesday, Dunne fired back at the Times for how they framed her story.

Sharing the very photo that appeared at the top of the article, Dunne wrote in an Instagram story, “@nytimes is this too much?”

Olivia Dunne, 20, won’t give specifics on her earnings, which at least one industry analyst projects will top $2 million over the next year. “That is something I’m proud of,” she said. https://t.co/mWtd1tb8Km

In the article, Stanford women’s basketball coach Tara VanDerveer said, “I guess sometimes we have this swinging pendulum, where we maybe take two steps forward, and then we take a step back. We’re fighting for all the opportunities to compete, to play, to have resources, to have facilities, to have coaches, and all the things that go with Olympic-caliber athletics.”

VanDerveer added that the way many female athletes are making their NIL money to be one of those “steps back.”

Stanford basketball star Haley Jones, who has endorsements with Nike, Beats by Dre, SoFi, was also interviewed for the story.

Jones said that despite sexy photos not being the “type of content” she wants to post, “You can go outside wearing sweatpants and a puffer jacket, and you’ll be sexualized. I could be on a podcast, and it could just be my voice, and I’ll face the same thing. So, I think it will be there, no matter what you do or how you present yourself.”

Dunne understands that and told the Times, “It’s just about showing as much or as little as you want.”

Dunne is the highest paid female college or high school athlete in the nation according to on3.com. The 20 year-old gymnast reportedly has an NIL valuation of $2.3 million.