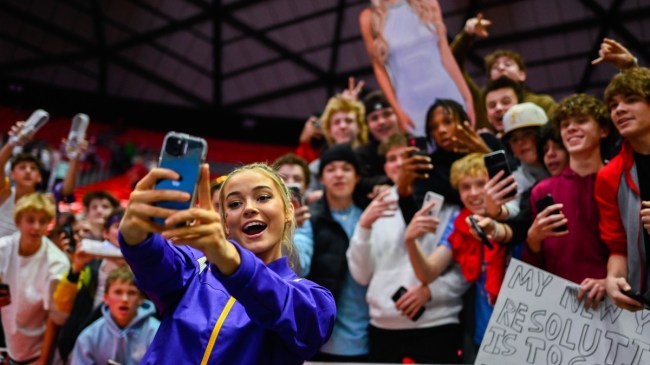 Olivia Dunne is quite the internet sensation these days. Everywhere you turn on social, the blonde 20-year-old is seemingly there.

She’s become a pop culture sensation, too. The LSU gymnast is undoubtedly the biggest draw in women’s sports right now, for better or worse.

Just look at how it was in LSU’s season-opening meet at Utah. Dunne was treated like a member of The Beatles.

In Utah, a group holding posters and a full-size cutout of Dunne screamed and chanted, disrupting routines.

LSU was later forced to relocate their bus.pic.twitter.com/SDBeeXIWUg

But, with this attention comes money. Lots of it. The former member of Team USA is very, very rich due to her NIL prowess that comes with her 9 million followers on TikTok and Instagram.

It’s not a secret how Dunne builds such an impressive follower count. Let’s take a look at some of recent viral TikToks.

not my dawgs creepin at the end💀

And, she’s done it again, this time telling her followers what kind of pants she wants them to wear. At least, that’s the stated purpose of the TikTok.

Well, if you own a pajama pants company, congratulations on the increased sales.