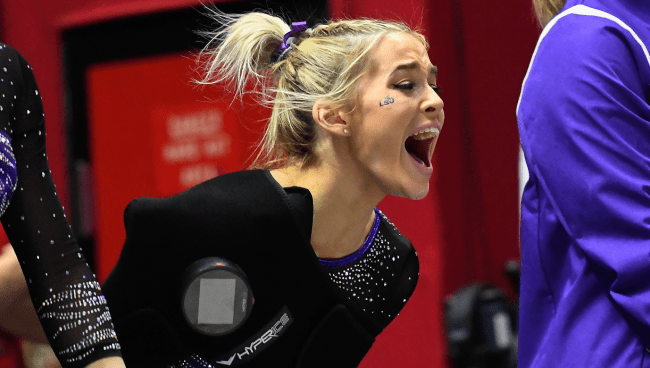 Olivia Dunne is seemingly getting more famous every day. The LSU gymnast is a social media hit, and has entered the American zeitgeist.

That’s what happens when you have over 9 million followers on Instagram and TikTok combined. That makes her the most followed college athlete in the country.

That’s added up to huge money for Dunne, who is among the tops in all of college athletics in NIL value.

Recently, she went even more mainstream when she went on the Today Show.

"As a woman, you're not responsible for how a man looks at you and objectifies you."

LSU gymnast and TikTok star Olivia Dunne says some messages she gets on social media are "scary" and "concerning." pic.twitter.com/bUUraBE3bF

Currently, the LSU Tiger is not competing, as she is dealing with shoulder and leg injuries. But, that just means she’s had a lot of time to make viral TikToks.

not my dawgs creepin at the end💀

And, she’s gone viral once again. This time, it’s a collection of never-before-seen photos.

This link will take you to it.

It’s already blown up, as it has over 3.5 million views in less than 24 hours. Just another viral TikTok for Olivia Dunne.