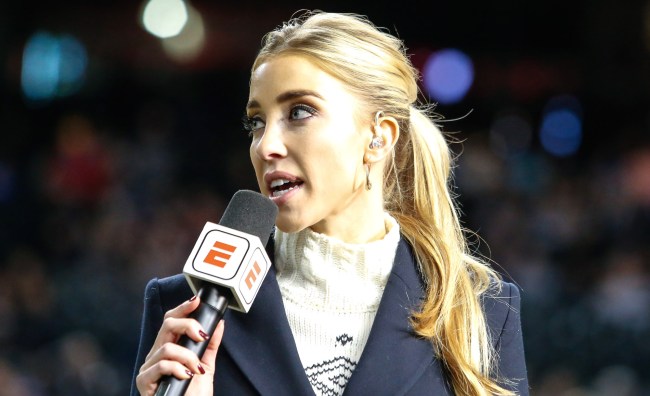 If you follow sports then you are probably familiar with sideline reporter Olivia Harlan Dekker.

She’s the daughter of legendary broadcaster Kevin Harlan and the wife of former NBA player Sam Dekker – now a member of the Lokomotiv Kuban. Olivia and Sam got married in July of 2018 after announcing their engagement in May of 2017. Oh yeah, her grandfather is Bob Harlan, a former executive for the Green Bay Packers. It’s quite the sports family.

After being named Miss Kansas Teen USA in 2010, Olivia went on to graduate from the University of Georgia in 2014. As a professional Olivia has worked for the Green Bay Packers as a team reporter, covered SEC and ACC football for Fox Sports South and Raycom, hosted ACC All-Access, and served as a sideline reporter for Atlanta Hawks games.

In 2018, she even got to work with her dad Kevin on October 15, 2018 as the sideline reporter for the San Francisco 49ers-Green Bay Packers game he was announcing.

Now she works as a sideline reporter for ESPN college football games, NFL games on Westwood One Sports, and covers basketball for the Big Ten Network (and moonlights as a style blogger on the side).

It was in that latter capacity that, on Wednesday night, Olivia was given the honor of singing the national anthem at her husband’s alma mater prior to the Badgers’ tilt with the Illinois Fighting Illini.

And she nailed it. Give a listen.

Her husband over in Krasnodar, Russia was very impressed.

This is very cool to me https://t.co/as1XehabfL