Russian Olympian Darya Klishina Says She Was Offered $200K A Month To Be An Escort In The U.S. 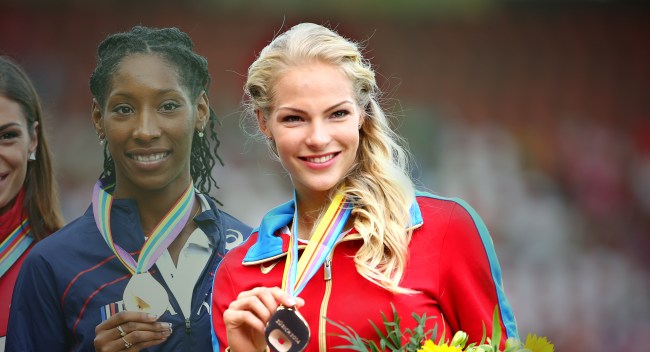 If you follow track and field, and more specifically, if you follow long jump competitors (and who doesn’t?), then you are probably very familiar with the name Darya Klishina.

That’s because Darya Klishina, a 29-year-old track and field star from Russia, has been competing in world championship level long jump competitions since way back in 2007, once setting a Russian junior record in the discipline.

Klishina, who currently lives in Atlanta, Georgia, and is one of the most recognizable Russian athletes, said in a very, very lenghty and eye-opening interview this week with sports.ru that after moving to the United States she was offered $200,000 a month to become a high-class escort.

When Klishina was asked during the interview to share the strangest offer she has ever received from a man, she replied that the offer to become a call girl came on Instagram.

“Can you imagine? I was offered to provide escort services. It was less than six months ago. I was really shocked,” she admitted.

“An unknown man messaged me on Instagram. I’m not in the habit of being rude, but I adamantly rejected the offer.”

The offer was pretty stout too.

“[I said] ‘Sorry, but I’m not interested in that.’ But he continued, ‘Oh please, don’t refuse it, you don’t know all the terms. I’m offering you a huge amount of money.’ He said I will earn $200,000 per month. I was just wondering do I really come across as an escort girl?”

Klishina also talked about some of the differences between living in the United States versus living in Russia.

“Here everyone lives on credit,” she said. “In Russia, people take credit only when there is an urgent need for it. In America, credit is the norm. I don’t understand why I need a credit card. Why should I pay her at the store at least once a month and replenish with my debit. But if I don’t do it, I can’t buy a car, rent an apartment, buy a phone. Somewhere you have to play by their rules, even if you don’t like it.”

She also complained about visiting New York City, saying, “These smells, especially in the summer, are just awful. I want to wear a mask. Compared to New York, Moscow is incredibly clean.”

Klishina does give America props for being more friendly, however.

“The last time I came to Moscow in the fall I walked somewhere and mechanically said ‘hello’ to a stranger,” she recalled. “He looked at me like he was confused. Then I remembered that I was not in America.”

Klishina also talked about how expensive health care is in America, how much money she makes from sponsorship, how people in America never have bad teeth, finishing 9th at the Rio Olympic Games, her hobbies, and a racy photo shoot she did that generated some controversy.

“Everyone has, let’s say, mistakes of youth,” she admitted. “This is again about the system in Russia, when you were sent, they took you by the hand and told to do it. You do it without thinking that it can somehow affect your career or that it is even out of place. I think of the way it was and now I would say no 200%.”