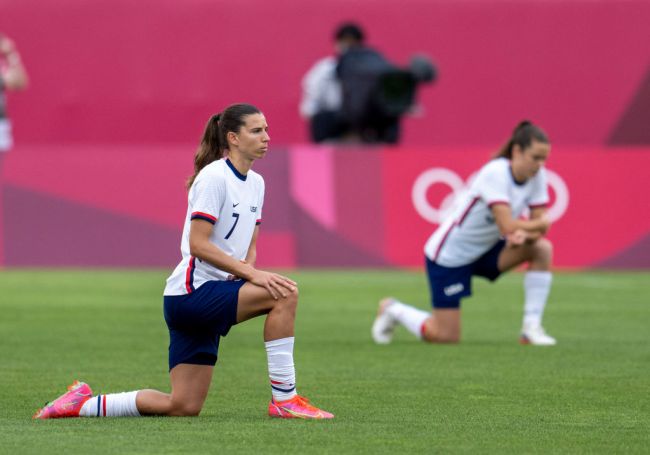 Taking a knee as a team ahead of kickoff to protest racism and discrimination has been a common theme in soccer for quite some time now, both on the international stage and at the club level.

The movement continued in the women’s Olympic tournament with the majority of teams electing to kneel for a few seconds before getting the game underway. Ahead of the USWNT’s bronze-medal match against Australia, the team took a collective knee, but one star player remained standing.

Carli Lloyd stayed on her feet with her hands on her hips as the rest of her team, staff members on the sideline, and referees took a knee. The Australians stood side-by-side with linked arms while the U.S. side dropped to one knee.

Lloyd went on to score twice to help lead Team USA to a bronze medal. With her two goals in the match, the 39-year-old now owns the record for most Olympic goals in USWNT history with 10.

ALL the USWNT players and staff knelt. All except Carli Lloyd. To say Lloyd is a "somebody" on the team is an understatement.

Also surprised to see Australia didn't kneel and are actually standing in solidarity opposite the U.S.

Not sure what's going on here. But interesting. pic.twitter.com/7RPab0IWn1

According to Business Insider, all of the USWNT players stood during the playing of the national anthem ahead of games in Tokyo. The collective kneeling only took place right before kickoff.

Lloyd has been the outlier for quite some time when it comes to kneeling. She stood throughout the playing of the national anthem ahead of scrimmages and games in 2020 while the rest of the team took a knee.

The win over Australia may very well be Lloyd’s last as a member of the USWNT, but there’s no denying that she went out in style scoring a brace and cementing herself in the history books.