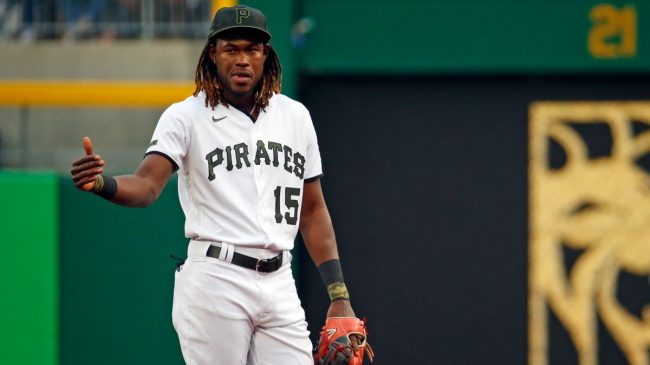 The Pittsburgh Pirates have found their next star.

Rookie shortstop Oneil Cruz is wowing MLB fans in his 2022 debut with an insane blend of arm strength, pop, and speed.

Cruz has been one of the top prospects in the Pirates’ farm system for some time. He hit .310 while slugging 17 homers last year in the minors. Now, he’s getting his opportunity at the major league level.

And he’s not disappointing.

Things got started quickly for the rookie, as he recorded the hardest thrown ball from an infielder on the year. Again, this his first start of the season. The clip immediately went viral.

It's Oneil Cruz's first game of the season and he already recorded the hardest throw by an infielder this year at 96.7 MPH 🤯 pic.twitter.com/5XUlqHRjac

As if that wasn’t enough for his debut, Cruz would soon turn his attention to the other side of the ball.

112.9 MPH off the bat of Oneil Cruz for his first hit of the season 😳 pic.twitter.com/XWM8ZIGrlK

In the third inning of play, Cruz smacked a double which rolled past the centerfielder and all the way to the wall. The line drive left the bat at 112.9 MPH and drove in three runs.

This gained even more attention on social media. It was the hardest hit ball by a Pirate this season. Did we mention that this is Cruz’s first game?

Just to put the cherry on top, his top sprint speed around the bases was also a Pittsburgh best in 2022 although he did get thrown out at third base.

Cruz helped the Pirates land a 12-1 win over the Cubs.