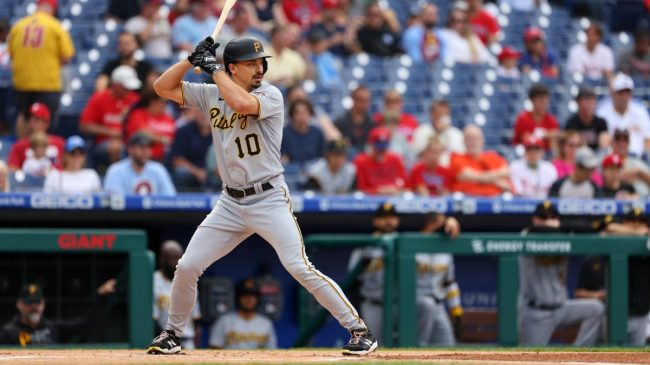 If you’re a Pittsburgh Pirates fan, the upcoming scenario is all too familiar.

The team is discussing trading away its best player just a week prior to Opening Day. Reports surfaced Thursday that Pirates’ ownership was speaking with the Padres about the possibility of dealing star outfielder Bryan Reynolds to the West Coast.

The San Diego #Padres have engaged in trade talks this spring with the Pittsburgh #Pirates in an attempt to acquire All-Star outfielder Bryan Reynolds. The Padres have pitching depth, and young pitchers Chris Paddack and Ryan Weathers have been mentioned in discussions.

A pair of young San Diego pitchers are involved in the trade discussions, too, but for Pittsburgh fans, it won’t make up for giving up on one of the team’s stars once again. Other teams are reportedly reaching out, too.

Per my source, @StevenACohen2's #Mets have reached out to Ben Cherington re: Bryan Reynolds. But the asking price remains very high. #Pirates https://t.co/0epFiyJhAK

The list goes on with the talent that Pittsburgh has traded away, only to watch players thrive in new homes. Gerrit Cole, Tyler Glasnow, Josh Bell, Austin Meadows, Jameson Taillon, Starling Marte, and Andrew McCutchen all make the list, and that’s just dating back the last five seasons.

You could go back and look at players like Brian Giles, Jason Bay, and Aramis Ramirez, too, as stars being traded in their primes.

It typically comes down to the wallet, and the stinginess shown by owner Bob Nutting. The Pirates always seem to be on the hunt for young talent, but as soon as that talent develops, they’re dealt to the highest bidder.

It’s not surprising that the organization has made the playoffs just three times in the last 30 years.

With rumors swirling surrounding a Bryan Reynolds trade, Nutting is taking some heat on social media.

Reynolds has spent just three big league seasons in Pittsburgh. He was a Rookie of the Year candidate in 2019. Last year, he landed his first All-Star honor.

For his young career, the switch-hitting outfielder is batting .290 with 47 homers and 139 extra base hits. In 2021, Reynolds led the league in triples while recording career bests in home runs, runs batted in, and total bases.

He’s arguably the best player on the team.

With yet another young star possibly on the chopping block, Pittsburgh fans are voicing frustration with Pirates ownership.

I really hope the Pirates don’t trade Bryan Reynolds to anyone. Their fans deserve way better than that 🙏🏻

Is there a more hated man in the entire City of Pittsburgh than Bob Nutting? A proud city with very proud, dedicated sports fans. And we’re stuck with this greedy pig running our baseball club. It’s just so unfair.

Owner Bob Nutting bought the team for $92 million and it's now valued at $1.3 billion. https://t.co/IjX0zinUe5

Bob Nutting is the worst figure in the history of Pittsburgh sports.@MLB please do something.

The day after Bob Nutting sells the Pirates: pic.twitter.com/iphB6L3nmD

List of terrible human beings in need of being overthrown:
1A. Vladimir Putin
1B. Bob Nutting

NFL WR’s and controversial QB’s out here getting 100 mil guaranteed while Bob Nutting is trying to withhold $500,000 from Bryan Reynolds.

Contract amounts handed out over the last year or 2 by small market teams:

Is Bryan Reynolds really on the move? Dude can really hit.

The #Pirates should be looking to give Bryan Reynolds a hefty extension rather than shopping him. Unbelievable. #MLB

How about just try to keep Bryan Reynolds? https://t.co/E4onhRwm4M

Pirates fans will hope to hold on to their star player with the opener quickly approaching. If not, you can plan on another long season in Pittsburgh.