OnlyFans Model Who Claims She Hooked Up With Antonio Brown, Implies NBA Star Devin Booker Is Cheating On Kendall Jenner By Sliding In Her DMs 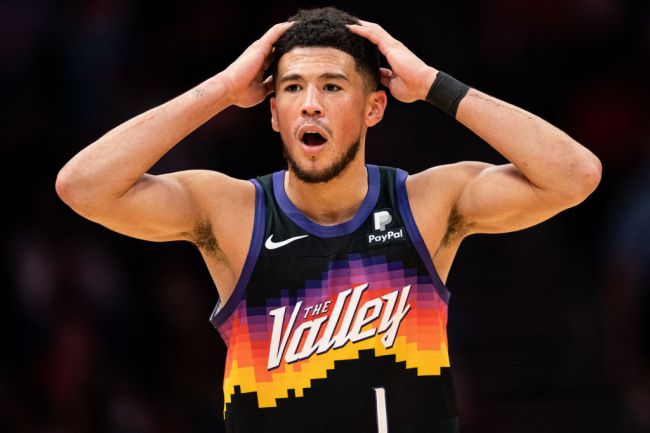 OnlyFans model Ava Louise is riding her latest 15 minutes of fame by trying to make a name for herself by exposing athletes who are in her DMs, and it appears that NBA star Devin Booker is her latest victim.

Louise, who had previously gone viral in 2020 for participating in a TikTok challenge involving licking airline toilet seats, trended on social media on Thursday night when she alleged that she had hooked up with Brown before his now-infamous sideline meltdown.

According to Louise, Brown violated NFL protocols by sneaking her into the Bucs team hotel the night before Sunday’s game to have sex.

Ava Louise shares with @craigcartonlive and @EvanRobertsWFAN the intimate details of her alleged encounter with Antonio Brown the night before he left the field shirtless against the Jets: pic.twitter.com/yYBwP0Oirc

The two had exchanged messages since 2018, but their first in-person meeting came the night before Sunday’s game against the Jets, when Brown invited her over to his hotel room.

“He tells me he’s at the Westin in Jersey City, which is literally a seven-minute walk from my apartment,” Louise said.

Louise arrived at the hotel and didn’t run into much security on the way in.

“I see a bunch of people going in the elevator and I just hop in,” Louise said. “There’s a big sign that it’s the Bucs floor…saying Tom Brady is on the second floor and where they go for training and stuff like that…so I look and there’s a security guard sitting there at a desk…I’m on the phone with him like ‘be right there,’ just walk past the security guard. The security guard just looks up at me and sees me go into the room, and that was that.”

Louise said Brown filmed the two having sex once she arrived at the hotel, and after Brown initially expressed his excitement for Sunday’s game and Tampa Bay’s potential run at another Super Bowl, but then seemed to indicate that he’d be doing something more on Sunday.

Less than 24 hours later, Brown was running off the field shirtless, and later released by the Bucs. Louise texted Brown asking why he ran off the field, but just got a quick response.

Louise went on to share a positive test result while urging the Tampa Bay Bucs to get tested.

Ava Louise, the woman claiming Antonio Brown smuggled her into the team hotel, posted this on IG. Ironically, she started an internet challenge by licking an airplane toilet seat in 2020 calling it the “Coronavirus Challenge.” She posts, “Buccaneers, test your team!” pic.twitter.com/Tos3k5CrhC

The OnlyFans model is now claiming that NBA star Devin Booker has attempted to hook up with her too. After her stories about Antonio Brown went viral, Louise posted a DM in which Booker asked for her phone number.

Looks like Ava Louise is expanding her horizons… pic.twitter.com/aZDSm8tP0u

It is worth noting that Booker is currently dating reality TV star Kendall Jenner and the two are reportedly set to get engaged before their two-year anniversary.